Double Talk, Silence Of Sharansky, Bennett And Netanyahu, Appear To Hide Plan To Marginalize Women Of The Wall, Non-Orthodox Movements 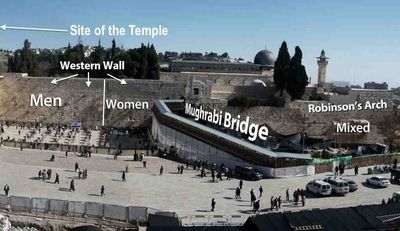 Elad-City of David Foundation vice president Doron Spielman told the Jerusalem Post that that the deal for Elad-City of David to take over the management of the site that houses the new egalitarian prayer area that is supposed to be linked directly to the Kotel (Western Wall) is legal and will not impact any current government agreements.

Spielman also said leftwing groups assume Elad-City of David will breach the government’s agreement with Women of the Wall.

“That is so not true. When the agreement is finalized, we will honor all previous agreements with the State of Israel, including Women of the Wall [WoW],” Spielman said.

Most troubling, however, is Speilman’s description of how Elad-City of David was given control over the site.

Spielman told the Post that the government’s Jewish Quarter Development (JQDC) Corporation approached Elad-City of David and asked it to take over management of the Robinson’s Arch area that includes the egalitarian prayer space.

The two groups then made the deal after purportedly getting a legal opinion that no public tender was necessary – a dubious claim.

Spielman insisted the Israel Antiquities Authority strictly oversees of all excavations, and would not allow artifacts from the Muslims and Christian periods to be destroyed.

“The archeological authority that excavates at the site is solely the Antiquities Authority – one of the world’s most renowned archeological bodies. The guidelines of that authority…give equal standing to all significant structures relating to all periods in all excavations in Israel, including those at the City of David,” Spielman said.

Earlier in the week, Elad-City of David did not answer questions from Ha’aretz about the deal but was willing to talk to the Jerusalem Post – which is right of center politically.

Bennett abruptly built a raised platform for egalitarian prayer at Robinson’s Arch last year in a successful attempt to isolate and neutralize Women of the Wall (WoW).

WoW broke under the pressure caused by Bennett’s unilateral action and, to consternation of many of its longest term members, agreed to give up its claim to pray in the women’s section of the Kotel proper – a claim an Israeli court had recently strongly upheld.

As an inducement, the government offered WoW’s top leaders positions of partial control over the egalitarian area that would be shared with the Reform and Conservative Movements.

But now the egalitarian area and the control that comes with it has been given to Elad-City of David.

The head of the Israeli Conservative movement Yizhar Hess said the new agreement with Elad-City of David Foundation was a complete surprise to the non-Orthodox groups.

“We were negotiating [with Jewish Agency Chairman Natan Sharansky – who was tasked by the prime minister with reaching an accord between WoW, the non-Orthodox groups and the haredim who have de facto control of the Kotel proper – and the government] the final details of how [the egalitarian prayer area] would be managed. It was never mentioned that the City of David Foundation would be the one to actually run the place.…It’s inappropriate that instead of handing it according to the Sharansky plan, it’s another step back from the Sharansky plan,” Hess told JTA.

Sharansky’s proposal, which was backed by the government, was first made last year. It was provisionally accepted by the non-Orthodox groups and by WoW, and created a pluralist council to manage the site.

Natan Sharansky, Naftali Bennett, And Prime Minsiter Benjamin Netanyahu – all of them politically right wing, pro-settler and pro-Orthodoxy – have all be silent about the Elad-City of David deal, as have WoW and the Reform Movement.

All Other Women Of The Wall Kotel Controversy Posts.

Double Talk, Silence Of Sharansky, Bennett And Netanyahu, Appear To Hide Plan To Marginalize Women Of The Wall, Non-Orthodox Movements