When Israeli Haredim Want To Leave, They Often Find They Have Nowhere To Go 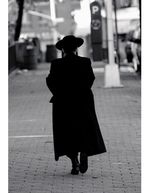 "Although the government is now offering a growing range of vocational training programs and grants for ultra-Orthodox men and women interested in joining the workforce, only those who remain Haredi are eligible. What choice is there but to remain inside and raise another generation in denial?" Writing in Ha'aretz, Anschel Peffer lists all the reasons many haredim are trapped in haredi communities, even though they want to leave. Because their schools teach little or no secular subjects (and what they do teach they teach badly), most haredim lack the education and training to succeed in the modern workforce. There is no support to speak of for them if they do choose to leave and even the army isn't the way out if you still have family in Israel because the army won't pay your room and board when you're on leave. You're trapped, trapped while the Israeli government pours hundreds of millions of shekels into the haredi schools that failed tp properly (or at all) teach you math and science, and into various programs that aid haredim – but not ex-haredim:

…[H]ow on earth could you ever survive outside, without the support structure of family and community, bereft of any of the qualifications necessary for employment in all but the most low-paying of jobs?

Although the government is now offering a growing range of vocational training programs and grants for ultra-Orthodox men and women interested in joining the workforce, only those who remain Haredi are eligible. What choice is there but to remain inside and raise another generation in denial?

The incredible thing is that, despite the seemingly insurmountable obstacles, a growing number of young Haredim do choose to leave.

An analysis of Central Bureau of Statistics figures – carried out by Moshe Sheinfeld, founder of Yotzim Leshinui, which advocates on behalf of those who leave the Haredi world – finds that in the 20-40 age group, 4 percent of those who were born ultra-Orthodox are today either secular or religious, but not Haredi. That’s over 900 leavers each year, without education and support, and their number is growing annually.

While hundreds of millions of shekels of taxpayers’ money fund the yeshivas they left, those who were left without any relevant qualifications, thanks to this state-funded trap, receive no assistance, save from a couple of underfunded volunteer organizations.

Of course, it’s the government’s responsibility to provide solutions for this growing sector of Israeli society – the ex-Haredim. But it will take years for the government to get its act together, and meanwhile there are lives to be saved and built.

This is a wake-up call for Jewish philanthropy. Imagine what a difference a well-funded comprehensive program of education, counseling and long-term loans could make in the lives of the thousands of young men and women who will leave the Haredi community over the next decade and make their first brave steps in the real world.

But what Pfeffer does not say is that haredi political parties and haredi rabbinic leaders have spent years blocking funding for programs to help ex-haredim, and Prime minister Benjamin Netanyahu and his Likud Part have largely done what haredi leaders want done on this issue because almost always, Likud desperately needs haredi support to stay in power.

So why don't the Jewish Federations step in fund programs for ex-haredim?

For the same reasons they barely fund any programs for American ex-haredim, who suffer many of the same problems their Israeli cousins do.

The Federations simply do not care. They do not understand this issue and they have little interest in learning about it. They also ignore other serious issues including Jewish homelessness, and other than direct much of their anti-povery money and food support to haredi communities and Russians, they do almost nothing to help the Jewish poor. (If you're poor and not hooked up in one of those communities, it's very difficult to get the same level of aid given to haredim and Russians.)

William E. Rapfogel and his co-conspirators apparently stole millions of dollars over two decades from the New York City federation's anti-poverty arm and no one with oversight powers even noticed. And they arguably didn't notice because they arguably didn't really care.

Seriously fund ex-haredim? Truly help homeless Jews (many of whom are ex-haredim)? Do more than sleepwalk through their duties?

When Israeli Haredim Want To Leave, They Often Find They Have Nowhere To Go

"Although the government is now offering a growing range of vocational training programs and grants for ultra-Orthodox men and women interested in joining the workforce, only those who remain Haredi are eligible. What choice is there but to remain inside and raise another generation in denial?"