New drawings created by haredi children who are likely part of the Edah Haredit umbrella group depict the IDF as a garbage truck and haredi soldiers as predators attempting to destroy and kill haredi children. 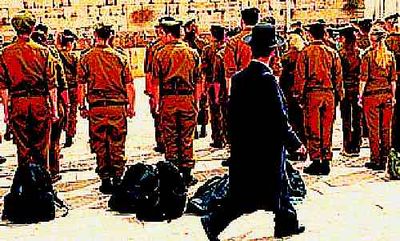 New drawings created by haredi children who are likely part of the Edah Haredit umbrella group depict the IDF as a garbage truck and haredi soldiers as predators attempting to destroy and kill haredi children, Ynet reported.

The cartoons were published as posters and fliers by an haredi anti-draft organization and were posted in heavily haredi areas of Jerusalem.

The organization’s leaders keep themselves anonymous and are unknown.

According to Ynet, one of the new posters shows haredi soldiers being burned alive inside an IDF base, screaming "help!” and “tata!” (Tata,  the Yiddish word for father and a colloquial expression for God, is often uttered by haredim in times of despair. Next to the burning haredi soldiers is a smug, satisfied smiling character that is half man and half fox and is wearing an IDF uniform. It also has a beard and yarmulke, and is meant to symbolize the people responsible for the new haredi soldiers’ torture.

Another cartoon reportedly shows something called the "national trash can of the IDF and civil service.” Haredi yeshiva students are forcibly shoved into it and later exit it shaved, in full IDF uniform and wearing red military berets.

The posters reportedly warn of  "poison of the hardak bacteria," and call haredi soldiers the "Cantonists of Israel.” The posters warn that "child abductors are roaming the market" and show an ex-haredi screaming, "Save me, I've became a hardak, I regret it."

One of these new posters is reportedly sponsored by the "Proper Speech Institute" which works against "slander, disagreement and humiliation." It cites the Sefer Chafetz Chaim to justify its slander.

Another flier was reportedly  distributed to synagogue managers. It urges them to record vandalism against the new posters ads and theft of the fliers and other anti-draft propaganda material – which anti-draft organizers attribute to the IDF and its ‘haredi’ battalion.

"At the instruction of the rabbis…whoever meets a suspected guy of this kind must follow him and document the theft in a regular camera or [a secret] one installed on a pen…so that we can handle these guys according to the way of the Torah,” the flier reportedly says.

"These days, dear generous people have begun purchasing hidden cameras which will be operated in certain synagogue, where the hardak thefts are particularly active. There is a lot of work of course, so the public must contribute and help,” the flier reportedly continues.

"Jew, remember! Every booklet and every information paper is a very precious weapon. It has the power to prevent a Jewish soul from falling into the impurity and filth of the army and civil-national service. We are in a fighting retreat – to be or not to be…May we enhance the prestige of the Torah and cut down the evil,” the flier distributed to synagogue managers reportedly concludes.

Posted at 11:47 AM in Haredim, Israel, Religion, Religion & State | Permalink

New drawings created by haredi children who are likely part of the Edah Haredit umbrella group depict the IDF as a garbage truck and haredi soldiers as predators attempting to destroy and kill haredi children.