But missing from the list is Rabbi Aharon Lichtenstein, the son-in-law of the late Rabbi J.B. Soleveichik and a staunch supporter of Yeshiva University – another indication of where the attacks against Weiss probably came from. 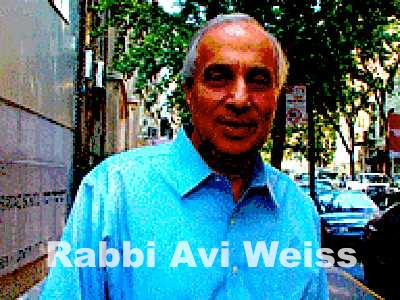 A group of leading Zionist Orthodox - Modern Orthodox Israeli rabbis, including the head of the liberal Zionist Orthodox Tzohar organization, have come out in support of Riverdale's Rabbi Avi Weiss, whose ability to vouch for the Jewishness of American couples seeking to marry in Israel was removed by Israel's haredi-controlled chief rabbinate without a hearing or a beit din (religious court) proceeding.

But missing from that list is Rabbi Aharon Lichtenstein, the son-in-law of the late Rabbi J.B. Soleveichik and a staunch supporter of Yeshiva University. This is another indication of where the attacks against Weiss probably came from – rabbis closely linked to Yeshiva University's Hershal Schachter and/or Schachter himself, but probably not Lichtenstein himself – a clue missed by Ynet:

…”It's unthinkable that the loyalty of a rabbi committed to Halacha will be rejected for testifying that a person from his community is Jewish," said Rabbi David Stav, chairman of the Tzohar rabbinical organization. He added that there was no reason not to discuss Rabbi Weiss' rulings– on conversion issues, for example – and disagree about them, but "one cannot argue that when he says that a person is Jewish – that person is not Jewish."

Efrat local council Rabbi Shlomo Riskin testified that he personally knows Rabbi Weiss as "a person who is strict about every single mitzvah," adding that in regards to his ordaining of women to serve as clergy members in modern Orthodox synagogues, he has someone to lean on halachically.


"Rabbi Avi Weiss is one of the most active and important rabbis not only in the American Jewry, but in the world Jewry," Riskin said. "He has prepared hundreds if not thousands of Jews to observe mitzvot and the Torah, and he is devoted to Jews and Judaism in every place where they are in danger."

According to Rabbi David Bigman, co-head of Yeshivat Ma'ale Gilboa, "There have always been disputes over Halacha, and the open discourse is the vitality of the oral Torah. Only by significantly deviating from the road, scholars have rejected the owner of an unusual opinion rather than just his opinion.

"If rabbinical authorities disagree about an opinion voiced by Rabbi Weiss, they should disagree about it strongly but through a proper Torah discourse. Disqualifying a person over his halachic opinions without even mentioning those opinions, and without discussing their content and validity, is not Torah's way. A proper dispute not only does not harm the Torah, it even increases its strength."

Kibbutz Lavi Rabbi Yehuda Gilad, another co-head of Yeshivat Ma'ale Gilboa, called on the Chief Rabbinate to stand by Orthodox Judaism – and mainly modern Orthodoxy – in the United States, whose rabbis were working tirelessly to draw their congregants closer to Judaism, in an era of growing assimilation.

"Rabbi Weiss stands at the forefront of this battle among the US Jewry," Gilad noted, arguing that disqualifying the American rabbi was "a serious and foolish mistake.”…

But missing from the list is Rabbi Aharon Lichtenstein, the son-in-law of the late Rabbi J.B. Soleveichik and a staunch supporter of Yeshiva University – another indication of where the attacks against Weiss probably came from.