How Jewish Was The Murdered Satmar Slumlord Menachem "Max" Stark? 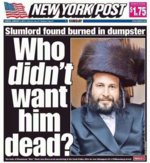 "…[I]f Menachem Stark, a slumlord who gave slumlords a bad name, was Jewish in his death, was he also Jewish in his life? Was he Jewish when he bounced checks, defrauded tenants, and rented out buildings unfit even for animals? Was he a representative of “the entire Jewish community” then?…" 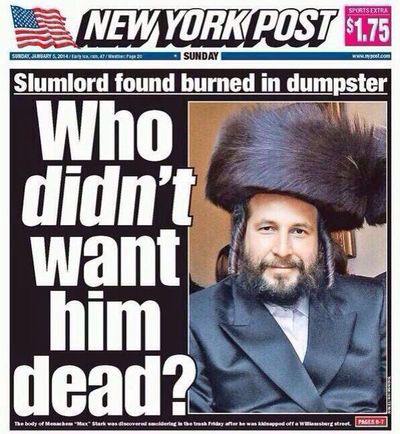 …[I]f Menachem Stark, a slumlord who gave slumlords a bad name, was Jewish in his death, was he also Jewish in his life? Was he Jewish when he bounced checks, defrauded tenants, and rented out buildings unfit even for animals? Was he a representative of “the entire Jewish community” then?…

Stark was hardly the only ultra-Orthodox Jewish slumlord in Brooklyn. Thanks to the oddities of the Brooklyn real estate market, Haredim control properties in some of the borough’s coolest neighborhoods: Williamsburg, Greenpoint, Bushwick. These places were crime-ridden slums a decade ago, but now they’re filled with my friends — one of whom said, on Facebook, that Stark “sounds like every Hasidic landlord I’ve ever had.”

Is it anti-Semitic for him to say that? Or is it, sadly, accurate?

There are, I assume, plenty of scrupulous and kind Haredi landlords. And there are centuries of anti-Semitic violence beneath the image of the cheap and unscrupulous Jew, which should make anyone pause before painting it.

But by all accounts, Stark was what used to be called a shandeh fer de goyim, a scandal for the non-Jews. Bernie Madoff, Roy Cohn, Jack Abramoff — these are Jews who make Jews look bad. In life and in death.

The mourning of him as some kind of hero makes matters even worse. According to his mourners, Menachem Stark was generous “to anyone in the community.” Note the qualifier. Ripping off, endangering, and lying to the goyim — which, let’s recall, includes anyone who isn’t Haredi — is just fine, as long as you help your fellow Satmars. Mob bosses, too, were often generous to their communities.…

Michelson goes on to note that Satmar hasidim also jeer and spit at runners in the New York City Marathon when they pass through Williamsburg and that the community is notorious for covering up child sexual abuse.

"If Stark’s death was inseparable from his Satmar Haredi Judaism," Michelson asks, "what about his life?"

I'll add that the statements issued by so many politicians, rabbis and and haredi organizations all fail to take into account the bad that Menachem Stark unquestionably did.

And if you're going to ignore that bad and ignore the people – the victims – Stark hurt, you should lose the moral standing to complain about how anyone short of the KKK covers his death.

It isn't just Hikind's or Councilman David Greenfield's posturing for the media, or the RCA's foolish statement (reproduced below), or the other foolish statements that are wrong. It is the absence of any empathy for those Stark wronged, be they the tenants he screwed, the people he loan sharked to at 30% (or more) interest, and the people he screwed.

Was the Post cover tasteless? Not any more than its covers are several times each week, week in and week out, year after year.

No one had the right to kill Max Stark, but that does not make Stark a hero, a holy man, or a tzaddik.

Max Stark had dozens, perhaps hundreds, of enemies, many of who shed no tears when he was found murdered, and the Post is not anti-Semitic or insensitive for pointing this out.

Cops have a very large and complicated investigation to run, far larger and more complicated than with a normal murder.

As I wrote yesterday, "Who didn't want Max Stark dead?" is actually a very legitimate question, one cops are asking themselves as they investigate this murder.

That's because cops work by ruling out suspects. The net is cast wide and all the fish who are the wrong species are tossed out until only the right type of fish, and then the actual guilty fish among those, remain. And then prosecutors seek indictments and try to prove guilt beyond a reasonable doubt in court.

There are lots of reasons to dislike the Post, from its owner to its racism to its gratuitous sensationalism to its postage stamp sized 250 word "reports." But of the hasidim, haredim and Centrist Orthodox Jews who are complaining about the Post's Stark cover now, how many complained when the victims of the Post's sensationalism were not haredim or Jews? When those victims were Muslim, say, or black? Any thoughts? Whatever that number is, I fear it is much closer to zero than it is 100 or 75 or 50 or, I suspect, even to 10.

Again, I pointed out Sunday, asking who didn't want to kill Stark is exactly what cops are doing right now. And unlike a normal murder, the number of people they cannot immediately rule out is exceedingly large. When a reporter asks a cop, "Who wanted this guy dead?" and the cop answers, "Who didn't?," this is news – important news, as a matter of fact, because of how this impacts the investigation – and It should be reported.

That rabbis and politicians and other people prone to bluster and buffoonery appear not to know all this does not change the facts.

The Rabbinical Council of America, the largest Orthodox rabbinic association in America, strongly condemns the headline in the Sunday January 5, 2014 edition of the New York Post. In reporting on the kidnapping and gruesome murder of Menachem Stark, a Chassidic businessman who leaves behind a grieving wife and eight young children, the tabloid printed a headline that was as unacceptable and objectionable as it was inflammatory and provocative.

The headline, “Who Did Not Want Him Dead?”, crossed the line of all human decency and implied justification of the victim’s murder, violating the most basic tenets of ethical journalism.

We extend our condolences to the Stark family, and pray that this outrageous example of sensationalist journalism does not add to the pain of their loss.

We call upon the Post to issue a full apology.

How Jewish Was The Murdered Satmar Slumlord Menachem "Max" Stark?

"…[I]f Menachem Stark, a slumlord who gave slumlords a bad name, was Jewish in his death, was he also Jewish in his life? Was he Jewish when he bounced checks, defrauded tenants, and rented out buildings unfit even for animals? Was he a representative of “the entire Jewish community” then?…"