Haredi Lev Tahor Cult Back In Court – This Time In Rural Ontario, Canada 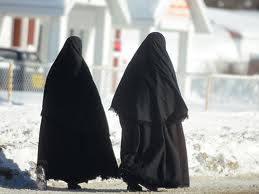 CHATHAM, Ont. -- A judge must take into consideration a proposed secular charter in Quebec when ruling whether to enforce a court order that would see children from an ultra-Orthodox Jewish sect who left the province returned there to foster care, the group's lawyer said Friday.

Members of the Lev Tahor community were under investigation by social services in Quebec late last year for issues including hygiene, children's health and allegations that the children weren't learning according to the provincial curriculum.

Court has heard that most of the community of about 200 people left their homes in Ste-Agathe-des-Monts in the middle of the night while that investigation was ongoing and settled in Chatham, Ont.

Child welfare authorities in Chatham are now asking the court to enforce an order subsequently made in Quebec that would see 14 children placed in foster care. The order is being appealed in Quebec.

The Ontario judge is set to rule on Feb. 3.

He must keep in mind a proposed charter of values looming in Quebec, said Chris Knowles, a lawyer for the families. The charter would restrict the wearing of conspicuous religious symbols such as turbans and hijabs by public-sector workers.

Knowles argued that the children's aid society in Chatham has no legal jurisdiction to ask the court to enforce Quebec's order, as he said their powers are limited to starting a child protection investigation of their own.

There is no specific avenue under the Child and Family Services Act for the Ontario court to enforce Quebec's order, said Chatham-Kent Children's Services' lawyer Loree Hodgson-Harris, but she pointed to other legislation under which she said the Ontario court could make an order.

"We can't allow in this country people to just pick up and leave because they don't like the process or they don't want to comply and it was pretty clear from the evidence that they weren't going to comply," she said.

The community denies any mistreatment of the children and says they were already planning to move out of Quebec.

But Hodgson-Harris, said the evidence clearly shows the group fled to escape the Quebec court's jurisdiction.

"The state of the families' homes obviously implied that the departure of the families was precipitous," she said. Some jewelry and credit cards were found left behind, and one coffee maker was left on, she said.

The hearing was previously adjourned on Dec. 23 so that one of the children -- a teenage mother -- could be represented by a separate lawyer. Chatham-Kent Children's Services' lawyer said they are not asking the court to order the return of the teenage mother.

The Lev Tahor, which means "pure heart," came to Canada in 2005 after their spiritual leader, Rabbi Shlomo Elbarnes, was granted refugee status here.

Regarding the children in this case, because of a restriction that females in the community cannot remove their socks, one child's feet were "blue" from the amount of toe fungus, the social worker said. Community members said the infection could be cleared up with coconut oil and they were willing to modify their restriction to allow women to take their socks off at night, the social worker said.

…The Lev Tahor had a community in Ste.-Agathe, Que. There they were the subject of child protection orders that included issues of inadequate education. Faced with the prospect of 14 of its children being taken into care, the community whisked three busloads of families out of Quebec to Chatham in November.

“We’re not talking about Mr. and Mrs. Jones’s children here,” said Chris Knowles, lawyers for the Lev Tahor parents. “These are children being raised with very specific religious beliefs.”

Taking them from their community is bad enough, he argued. But giving effect to the Quebec order would send them to a province that has proven, with its proposed Charter of Values, to be intolerant of minority religions.

“How is that in their best interests?” Knowles said.

Loree Hodgson-Harris, lawyer for Chatham-Kent Children’s Services, said the children would be placed with Hasidic families in Montreal. “Their cultural and religious values will be respected.”

Knowles told the court that the Lev Tahor has launched an appeal of the Quebec decision. He asked Fuerth to postpone the hearing in Chatham until the Quebec appeal is heard. Fuerth declined and proceeded with Friday’s hearing.

Hodgson-Harris said the community knew child protection proceedings were underway when the families fled Ste.-Agathe in the middle of the night.

“People shouldn’t just be allowed to flee a jurisdiction to avoid the repercussions of a particular court,” she said.

As for the mobility rights enshrined in the Charter, they “apply to economic opportunity, not avoiding child protection proceedings,” she said.

One of the children at the heart of the hearing – a 17 year-old girl with an infant of her own – insists neither she nor her husband were ever given notice of the child protection hearing in Quebec before moving to Chatham. Other parents – only the fathers – did.

Court heard that Quebec considers anyone under 18 to be a child. In Ontario, the age is 16. The teenaged mother is 17.

Children’s aid workers in Chatham are not seeking the teenaged mother’s return to Quebec, court heard Friday. But they are seeking the return of her nursing baby.

Lawyer Gerri Wong, appointed by the province to represent the teenaged mother, said her client will not leave her child. The girl presents a “rather unique situation” for the court, Wong said.

The teenaged mother and her baby were in court for most of the proceedings Friday.  The mother, covered head to toe in the black robes of her faith, would dash out whenever her baby began to fuss.

Knowles said the children in the community appear to be well cared for. Children’s services workers visit regularly. “Where’s the evidence here that while being under the microsope of the Chatham Kent Children’s Service since they arrived that there’s a problem?”

And the St. Thomas Times-Journal adds even more:

They left in the dead of night, leaving their personal things and the community they’d lived in for years.

At stake for the 40 members of Lev Tahor, an ultra-orthodox Jewish sect from the Montreal area, were the children they feared would be taken by child-protection officials and put in temporary foster care.

It turned out they had good reason to worry: After they left, Quebec authorities successfully petitioned to apprehend 14 children from three families.

The group loaded up three buses and high-tailed it out of Ste. Agathe-des-Monts, Que., last Nov. 17 to Southwestern Ontario — to Chatham, nearly 800 km away.

They left so fast, Quebec authorities reported, they didn’t even have time to gather up credit cards and jewellery.

In one house, they left the coffee maker on.

Friday, a court in Chatham heard an application by the local child-welfare agency to enforce the Quebec order to put the kids in care in Quebec for 30 days to assess them. The order is being appealed.

In Chatham, Justice Stephen Fuerth heard there were plans to leave Quebec long before the Nov. 17 night-time exodus.

The group, distinct by the conservative clothes they wear, had been working with a Quebec real-estate broker to find a new place to live.

The broker’s affidavit told how the group had been talking about a move starting in April and visited properties in Eastern and Southwestern Ontario — in Belleville, Brighton, Brockville, Chatham, Hawkesbury, Morrisburg, Peterborough, Picton, Smiths Falls and Vankleek Hill.

Their reason for leaving was because Quebec authorities, who’d been involved with the group for several months, wanted to act on concerns about children’s education standards that the group said went against its religious beliefs.

But, aas the lawyer for the local child-welfare agency, Chatham-Kent Childrens’ Services, pointed out in court Friday, the flight plan was sped up once Quebec child-protection officials, advised parents Nov. 14 they’d be starting a court action. They were to meet Nov. 18.

Lev Tahor settled on property along Hwy. 40, north of Chatham, known as Spurgeon Villa, which it had visited Oct. 30.

They left without advising child-welfare officials — first arriving in Windsor, then all gradually settling in Chatham by Nov. 27, the same day Quebec child services were granted an order to seize the children.

One of the remaining Lev Tahor members in Quebec told the agency’s director after the group left, “You make us a surprise. We make you a surprise.”

“It’s clearly why they made the move,” so the Quebec court couldn’t get at the kids, local child-welfare agency lawyer Loree Hodgson-Harris said in her argument to let the local agency enforce the Quebec order.

“You can’t allow, in this country, people to pick up and leave just because they don’t like the process or they don’t want to comply,” she said.

But Lev Tahor lawyer Chris Knowles argued the local agency can’t use child-custody laws to enforce the Quebec order, and that the group’s Charter rights are being disregarded.

He also the group didn’t have to tell Quebec officials they were leaving.

The local child-welfare agency, he said, has been investigating the group since it arrived and hasn’t found any reason – specifically, serious health issues raised in the Quebec order – that have led to them to make their own application.

A previous order in Chatham-Kent was overturned that had placed two of the Lev Tahor children in foster care.

Quebec wants to place the children with Hasidic Jewish families in Montreal.

One 17-year-old woman, married with a baby, was on the list to be put in care but was removed Friday.

Her baby remains on the list, arrangements made so she can go with the infant to Quebec if the baby is put into care.

He also said it’s wrong to send the kids to a province planning to pass a Charter of Secular Values, “a province that has chosen to place religious rights beneath other rights.”

The judge is to rule on the application Feb. 3.

Outside court, Knowles said there’s an appeal process if the court orders the kids sent back to Quebec.

Haredi Lev Tahor Cult Back In Court – This Time In Rural Ontario, Canada