“We are not religious experts, but for medical reasons we cannot approve a procedure that removes tissue from the genitals [for non-medical reasons] in which the risk is so great for serious complications.” 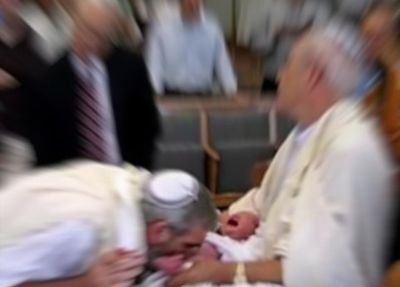 Doctors In Sweden And Denmark Call For A Ban On Infant Ritual Circumcision
Shmarya Rosenberg • FailedMessiah.com

Large medical associations in both Sweden and Denmark have recommended their governments issue bans on non-medical circumcision of infant boys, the JTA reported.

The ethics council of the Sweden Medical Association, whose members make up 85 percent of Sweden’s doctors, came out for a ban last week, proposing the minimum age for circumcision be 12-years-old, and that it only be done with the boy’s consent.

“We are not religious experts, but for medical reasons we cannot approve a procedure that removes tissue from the genitals in which the risk is so great for serious complications,” Thomas Flodin, the chief ethics officer, reportedly said.

In Sweden, by law all circumcisions must be done by licensed professionals. And even though mohels (Jewish ritual circumcisers) are licensed by Sweden’s health board, a nurse or doctor still must be present when a circumcision is done.

However, Sweden’s Minister for Integration Erik Ullenhag said ritual circumcision would not be outlawed and nonsensically equated circumcision with Christian baptism, which does not permanently change a boy’s body or involve surgery.

“I have never met any adult man who experienced circumcision as an assault. The procedure is not very intensive and parents have the right to raise their children according to their faith and tradition. If we prohibit it, we must also address the issue of the Christian ritual of baptism,” Ullenhag reportedly said.

Meanwhile, the Danish College of General Practitioners called non-medical circumcision of boys akin to abuse and mutilation and said in a non-binding recommendation that if circumcision is to be done, it must only be done by physicians in medical facilities.

In September the hard right wing Sweden Democrats Party reportedly submitted a motion in the Swedish parliament to ban all ritual circumcision.

And in October, the children’s ombudsmen from Finland, Iceland, Denmark, Sweden and Norway reportedly released a joint declaration stating that infant and child ritual circumcision should be banned.

Posted at 02:00 PM in Circumcision | Permalink

“We are not religious experts, but for medical reasons we cannot approve a procedure that removes tissue from the genitals [for non-medical reasons] in which the risk is so great for serious complications.”