Sefardi haredi kabbalist Rabbi Yoshiyahu Yosef Pinto hopes his claims of bribing a top Israel Police officer will keep him out of prison over other charges of embezzelment, attempted bribery of another police officer, money laundering and, just perhaps, bribery of other public officials. 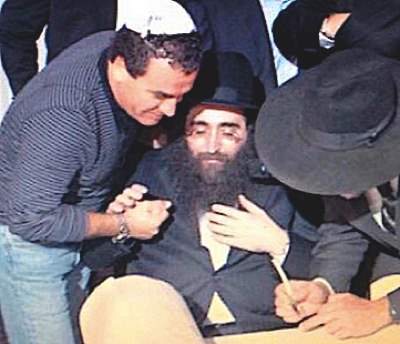 Israel’s Attorney General Yehuda Weinstein made his first public statement today regarding the bribery affair surrounding Sefardi haredi kabbalist Rabbi Yoshiyahu Yosef Pinto, one of Israel’s 10 richest rabbis with a net worth in the tens of millions of dollars – all earned through donations from followers and by dispensing business advice allegedly divined through his kabbalistic studies to business tycoons in Israel and in the diaspora.

Speaking at the weekly cabinet meeting, Weinstein said an investigation is in progress and that he hoped that "we will serve the public interest in the best way possible,” Ynet reported.

The national Israel Police Investigations Unit (PIU), Israel’s version of a police department internal affairs unit, has reportedly completed the first part of its own investigation into Police Commander Menashe Arbiv, the head of the Lahav 433 anti-fraud unit. Arbiv was previously the Israel Police liaison to the US. While Arbiv was in that position, Pinto – who spends much of the year in the US at his headquarters there – claims he bribed Arbiv.

Pinto is trying to use that claim to negotiate a plea bargain that would see him serve no time in prison for trying to bribe another high ranking police officer and for embezzling funds from his nonprofit, Hazon Yeshaya. A significant part of that stolen money came from large food donations made to feed Holocaust survivors. But instead of doing that, Hazon Yeshaya leaders sold those food donations on the gray market and pocketed the cash – much of which was allegedly given to Pinto in cash for his personal use. Pinto allegedly bribed or attempted to bribe high ranking police officers to get inside information on the investigation into the Hazon Yeshaya thefts and related crimes that most likely include money laundering and may also include bribing public officials.

PIU’s investigation into Arbiv is reportedly relying in part on three separate individual testimonies that allegedly support Pinto's claims. All of those testimonies apparently come from Pinto and his closest aides and supporters. At least one of those is apparently Ben Zion Suky, a former pornographer and Israeli national who lives in New York City.

Pinto reportedly hopes that state prosecutors will allow him to stay out of prison in exchange for helping them bring down Arbiv.

PIU and Weinstein are expected to ask Pinto's lawyers to turn over all materials they regarding the bribes and related issues so a criminal investigation can be launched.

But, if the state prosecutor's office decides to file charges against Pinto, Pinto’s attorneys will reportedly not allow the prosecution to use that evidence.

Arbiv took a leave of absence after the alleged bribes became public last week. And, although he said he would return to work this week, that is now thought to be unlikely.

Sefardi haredi kabbalist Rabbi Yoshiyahu Yosef Pinto hopes his claims of bribing a top Israel Police officer will keep him out of prison over other charges of embezzelment, attempted bribery of another police officer, money laundering and, just perhaps, bribery of other public officials.