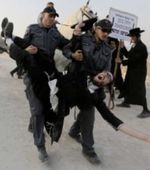 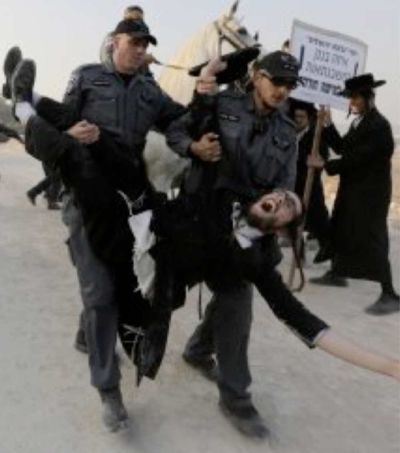 File photo: A haredi man being arrested at a protest at the Golovnnitz Project in Beit Shemesh in November 2013

The protest at the Golovnitz Project by the Atra Kadisha graves protection organization, which is essentially a subsidiary of the Meah-Shearim-based Edah Haredit haredi umbrella organization, have lately reportedly been a near-daily occurrence. But yesterday, a larger number of haredim protested and a prominent local haredi rabbi joined them, making the crowd even more agitated than usual, Yeshiva World reported.

The protest turned violent and as protesters clashed with police, two haredim were arrested.

This is the same construction site was the location of often violent protests throughout much of last year.

A number of senior haredi rabbis have ruled that there are no graves being disturbed at the site, which was also cleared for construction by the Israel Antiquities Authority. But a majority of rabbis affiliated with the virulently anti-Zionist Edah Haredit disagree. Last year, their followers harassed and threatened Edah’s number two rabbi, Moshe Sternbuch – who believes construction at the site should be permitted – physically attacked Sternuch’s adult son, and savagely beat the site’s elderly haredi developer.

Atra Kadisha, Edah Haredit’s graves protection organization, was shown by Israeli news media to be a criminal organization that extorts and physically threatens developers and archeologists, and uses those threats and violent protests to get financial settlements from them. These settlements often come in the form of a developer appointing a rabbi from Atra Kadisha as the site’s rabbi and paying him and a number of his assistants large salaries for their “work” inspecting the site and making sure no graves are disturbed. Appointing a haredi rabbi who is not a member of Atra Kadisha does not end the protests or the threats. Neither do rulings from the world’s top haredi rabbis – as Sternbuch found out last year.

A video made by a protester or supporter and posted on YouTube (and here immediately below) was allegedly taken at yesterday's protest. It shows what appear to be the site's private security guards or plainclothes police clashing with non-violent haredim.

Posted at 03:29 AM in Crime, Litigation, etc., Haredim, Israel | Permalink