The nearly 2,000 year old fabric fragment contains a fringe dyed with what scientists believe is the Biblical tekhelet, the mysterious blue or purple Jews are commanded to wear as fringes on the corners of their clothes and which was used in the coloring of the clothing of the Kohen Gadol (High Priest ) in the ancient Jerusalem Temple. 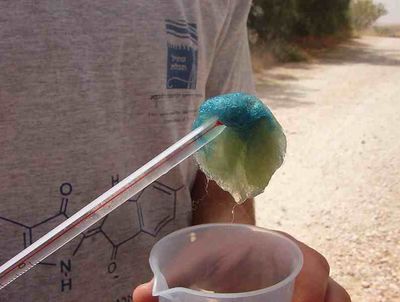 File photo: Wool being dyed with dye taken from a Murex snail by the Ptil Tekhelet Foundation. Sunlight causes the dye to consistently turn sky blue; without sunlight, the dye varies in color from almost purple to a light blue.

Israeli scientists have confirmed that a textile fragment with ritual fringes that is almost 2,000-years-old contains the blue color called tekhelet in the Bible, Ha'aretz reported.

This is only the second piece of such fabric ever found in Israel. The first piece, containing dark blue dye, was found at Masada during excavations there. But it may not be local in origin and for that and other reasons has had little impact on the debate about the actual color or source of the dye.

But the fragment studied and reported on now is of local origin, is close to 2,000 years old and apparently contains the real Biblical blue, a blue that is sky blue – not the dark blue found at Masada or the purple some rabbis have postulated. The fragment was reportedly found in the 1950s in a cave at Wadi Murba’at, a site where Jewish fighters hid during the Bar Kokhba revolt in the second century CE.

Dr. Na'ama Sukenik, a curator at the Israel Antiquities Authority, announced the find Monday at a conference held in Jerusalem to mark the 100th anniversary of the publication of Rabbi Yitzchak Halevi Herzog’s doctorate on tekhelet. Herzog, who later became the first Ashkenazi chief rabbi of Israel, postulated that the dye used to make tekhelet comes from the Murex snail.

But Herzog had difficulty producing one uniform color from Murex snail dye and eventually came to believe the Murex might not be the source of tekhelet dye.

After his death scientists discovered that sunlight causes the Murex dye to consistently turn sky blue; without sunlight, the dye varies in color from almost purple to a light blue. That would mean that if the Murex is the source of tekhelet dye, tekhelet must be sky blue in color.

Because of that, the Ptil Tekhelt Foundation in Israel began producing sky blue tekhelet made from Murex dye almost two decades ago.

In 1887 Rabbi Gershon Henoch Leiner, the Radziner Rebbe, postulated that the Sepia Officinalis (common cuttlefish) was the source of the Biblical dye, and Leiner, his hasidim, and some Breslov hasidim began wearing dark blue colored tekhelet made from it. Although it was later shown that almost any organic material, including ox blood, could have been used as the base of that dye, and that its blue color came from chemical and organic additives, not from the cuttlefish itself, Radziner hasidim and some Breslov hasidim continue to wear tekhelet made from it.

Which of these two tekhelet colors and sources is correct? Or is another yet to be discovered color and source the correct Biblical tekhelet dye and color?

Sukenik, who studied the Wadi Murba’at fabric fragment for her doctorate, recently had that fabric fragment chemically analyzed and found the dye does not come from cuttlefish – it comes from the Murex Trunchular, the snail Herzog argued 100 years ago that the tekhelet dye came from. That, combined with its presence on ancient tzitzit (ritual fringes), the location of the find and the high probability the fabric fragment comes from the army of Bar Kokhba – who briefly reigned as a kind of king over parts of Judea and who had the backing of the great Mishnaic rabbinic sage Rabbi Akiva and thousands of his students, many of whom joined Bar Kokhba’s army – makes Sukenik’s fragment the almost certain Biblical tekhelet, Murex-derived and sky blue.

The nearly 2,000 year old fabric fragment contains a fringe dyed with what scientists believe is the Biblical tekhelet, the mysterious blue or purple Jews are commanded to wear as fringes on the corners of their clothes and which was used in the coloring of the clothing of the Kohen Gadol (High Priest ) in the ancient Jerusalem Temple.