A new wave of haredi posters attacking haredi IDF soldiers and calling them missionaries and kidnappers drew swift condemnation from the IDF yesterday but no arrests. 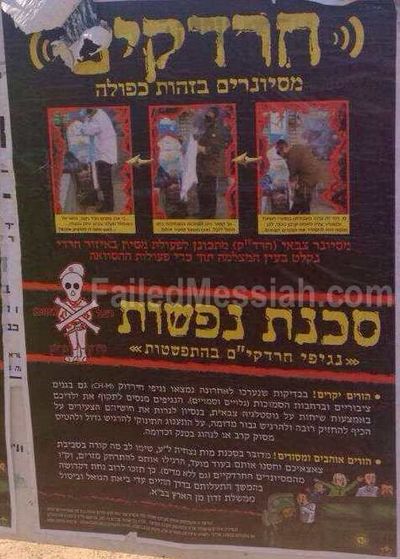 A new wave of haredi posters attacking haredi IDF soldiers and calling them missionaries and kidnappers was posted in haredi neighborhoods of Jerusalem Sunday. The posters drew swift condemnation from the IDF yesterday but no arrests, the Jerusalem Post reported.

“The IDF utterly denounces and condemns any violent behavior, physical or verbal, toward those who serve. The IDF provides special support to those who serve in it from the haredi community, due to sensitivity to their position. The military has set up a 24-hour assistance hotline for haredi soldiers,” the IDF reportedly said in an official statement released yesterday.

Under the headline “hardakim [light-headed haredi cockroaches, the haredi slur for haredi IDF soldiers] are missionaries with a double identity,” the new posters reportedly show a haredi soldier changing from his IDF uniform into black pants and a white shirt.

“The hardakim viruses are spreading… [and trying to] entice the senses [of haredi children with talk of] holding a rifle and feeling like a false hero.” The poster continues by saying that haredi soldiers pose a "dangerous threat to the lives" of haredim.

The poster reportedly also has a depiction of a haredi soldier kidnapping crying haredi children and placing them in an army jeep.

Similar posters, booklets and even a comic book for haredi children were distributed by haredim beginning last spring  and led to a wave of physical attacks on haredi soldiers, primarily by haredi teens. Haredi soldiers were beaten and stoned and, in at least one case, an elite police unit was needed to rescue the haredi haredi soldier from the mob seeking to lynch him. By July, the IDF had reportedly received over 80 complaints from haredi soldiers of physical violence and verbal abuse from haredim.

“No investigation [has been] opened as of [Sunday] evening. However, this issue is being looked into,” Jerusalem police spokesman Micky Rosenfeld told the Post.

Member of Knesset from the Yesh Atid Party Rabbi Dov Lipman claims he has seen evidence that the funding for these posters and comic books comes from the US.

Although the paper does not identify that source of funding, the two Satmar hasidic factions have openly raised money to support similar projects.

Posted at 03:50 AM in Crime, Litigation, etc., Haredim, Israel | Permalink

A new wave of haredi posters attacking haredi IDF soldiers and calling them missionaries and kidnappers drew swift condemnation from the IDF yesterday but no arrests.