"I'm 32, I arrived in Israel at the age of three, did my military service and have two children. There's no reason to treat me in this way." 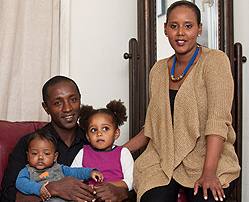 Member of Knesset Pnina Tamano-Shata and her family

Magen David Adom, Israel’s version of the Red Cross, had its blood donation stand removed from the Knesset after MDA volunteers working the stand told Member of Knesset Pnina Tamano-Shata today that the blood she wanted to donate would not be accepted because she was born in Ethiopia Israeli and international media reported.

Speaker of Knesset Yuli Edelstein threw the MDA stand and its volunteers out of Knesset and told Tamano-Shata he was shocked by the incident.

"I thought this was behind us, but now it turns out I was wrong. This unacceptable phenomenon that has no place in the Knesset," Edelstein reportedly told her.

Tamano-Shata – who was born in Ethiopia in 1981 and immigrated to Israel at age three in 1984 – was first told that she cannot donate blood because she is Ethiopian, but an MDA manager overruled that decision and told her she could donate – however, her blood will be frozen and not used, the MDA manager reportedly told Tamano-Shata.

Tamano-Shata led the Ethiopian protest movement against MDA in 2000, when she was only 16 years old, and again 2006. MDA had been taking blood donations from hundreds of Ethiopian Israelis and quietly throwing out the donated blood.

"I'm 32, I arrived in Israel at the age of three, did my military service and have two children. There's no reason to treat me in this way," Tamano-Shata reportedly told Channel 10 television news.

MDA attacked Tamano-Shata and accused her of carrying out a deliberate provocation because she is a member of the Knesset committee that is currently rewriting MDA’s blood donation criteria and had to have known that her blood would not be accepted.

Medical experts say there is no valid medical reason to exclude many of the potential blood donors MDA excludes.

"I'm 32, I arrived in Israel at the age of three, did my military service and have two children. There's no reason to treat me in this way."