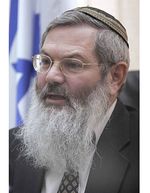 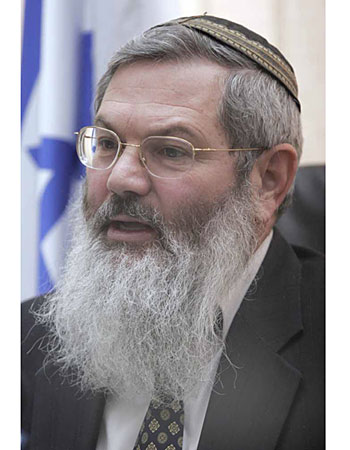 The chief rabbis’ bid to drastically expand their power was backed by an memorandum of law distributed in the Knesset yesterday by Deputy Religious Services Minister Rabbi Eli Ben Dahan of the Zionist Orthodox HaBayit HaYehudi Party. It proposes that the Rabbinate’s mashgichim (kosher food inspectors) be allowed to enter restaurants and businesses even if the proprietors do not want them to, take food samples, force any citizens they choose to identify themselves, and have the legal power to force those citizens to come into the Rabbinate for questioning. These kosher food police would also wear identification badges and police-style uniforms.

The Rabbinate fined these restaurants and threatened to go to court against them.

Under Israeli law, businesses cannot the word “kosher” in any advertising or materials unless they have kosher supervision from the Rabbinate.

But the law is not enforced in haredi neighborhoods, where private kosher supervisors reign and it is likely that any court proceeding against the restaurant owners in question today would fail because the Rabbinate refuses to enforce the law when the businesses in question are haredi-owned.

“They go to a place, but they cannot take anything from it or take photographs, and the business owner often throws the inspector out. We want to give them the power of inspectors from the Israel Nature and Parks Authority, who, if they see a problem, have the right to take the findings with them and engage in preliminary questioning,” Ben Dahan told Ha’aretz.

According to Ben Dahan’s memorandum of law, a uniformed kosher food inspector would have the power to “require any person to give his name and address and show an identification card or other official identifying document; to require any person involved in a case to provide any information or document that ensured he was abiding by the law... to take samples of products and materials and send them for examination... to enter a business or production facility, including places of storage and refrigeration on the premises or under the control of the one being inspected, including entering stationary vehicles, as long as he did not enter a place of residence except by court order.” If the inspector’s suspicions were aroused, he would be permitted to “question any person connected with the aforesaid violation, or who might have knowledge of the violation,” and also to “seize any object connected with the violation.”

Previously, Ben Dahan reportedly added a clause to the so-called Tzohar Law that mandated actual prison terms for Jews who marry in private ceremonies without registering with the Rabbinate or using state-recognized rabbis to officiate. Any rabbis officiating at such weddings would also be jailed.

“As you know, I support the state of Israel as a Jewish state, and we need to work toward greater enforcement of the state’s laws. In many spheres there is no law enforcement, and there are many examples of this, such as construction violations that nobody does anything about. But I, at least, in the small sphere that I deal with, will make sure to enforce the law by which the state is the one to issue kashrut certificates and register marriages, and those who do not obey should be punished,” Ben Dahan reportedly told Ha’aretz.