“We have an almost-life-size Nativity scene, and the [Chabad] hanukkia stands behind it, as a celebration of Jesus’s Jewish roots. We love it. It’s just beautiful." 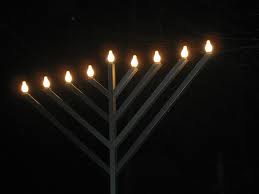 Rabbi Boruch Klar, the former outreach director of Chabad’s Morristown, New Jersey Rabbinical College of America, owns a judaica store in West Orange, New Jersey, Lubavitch Center Fine Judaica and runs the website Menorah.net, which he bills as the “only manufacturer of indoor/outdoor large display menorahs in the world.”

Klar – a pioneer in the giant menorah business – is the source for many of the giant hanukkah menorahs you see at Chabad Houses and shopping malls across the country.

According to a report in the New Jersey Jewish News, Klar sold more than 300 giant menorahs this year alone, all manufactured by a factory in China.

“[About 35 years ago,] the Rebbe [Rabbi Menachem Mendel Schneerson] said that menorahs should be seen in public places, to publicize the miracle of Hanukka. So everyone began looking for ways to make that happen,” Klar reportedly said.

That launched the giant menorah campaign and, soon after, Klar’s business, after he saw that the early prototypes produced by othres – including Minnesota’s Rabbi Gershon Grossbaum – were made from ugly PVC piping.

“It was embarrassing to have something so ugly out in public. They didn’t convey the grandeur of Hanukkah,” Klar said.

So Klar designed a giant menorah using light aluminum parts that slotted together to form a menorah shaped according to the Rebbe’s explanation of the menorah’s design with angular v-shaped branches.

All ancient depictions of menorahs ever found, including many contemporaneous with the Jerusalem Temple – including ancient Hasmonean coins – show a menorah with curved branches as is found on the Seal of the State of Israel.

There is absolutely no historical evidence to support Schneerson’s misreading of the biblical text.

But Chabad has adopted the ahistoric angular menorah anyway, and Klar is one of its chief purveyors.

He reportedly receives orders from all over the world, including Alaska, Israel, Italy, South Korea, US military bases, sports teams, banks, shopping centers, synagogues – and even churches. And Klar has no problems filling those orders – even when the menorah will be displayed inside or in front of a church.

“We had been wanting to get a hanukkia [the Modern Hebrew word for menorah] for some time but it had to wait until we moved into our new premises this year. We looked on-line, and all the other places were offering the Klar ones, so we turned to them. They were so wonderful to deal with,” Susan Ebarb, the church’s president, reportedly said.

God’s Word Never Fails Ministry’s menorah was lit for the first time on December 1 and will remain lit all year round.

“We have an almost-life-size Nativity scene, and the hanukkia stands behind it, as a celebration of Jesus’s Jewish roots. We love it. It’s just beautiful,” Ebarb said.

“We have an almost-life-size Nativity scene, and the [Chabad] hanukkia stands behind it, as a celebration of Jesus’s Jewish roots. We love it. It’s just beautiful."