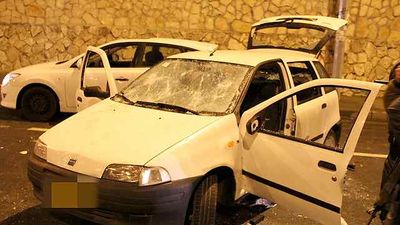 Israel Police say an Arab man, 40-year-old Majdi Al-Jarbawi, was driving in his car early Sunday morning when he arrived at about 3:30 am the intersection of Bar-Ilan Street and Golda Meir Boulevard in Jerusalem, which lies on the edge of several large haredi neighborhoods and is only several blocks from largely haredi neighborhoods of Israel’s capital, the Times of Israel reported.

Hundreds of haredim were still choking the street to protest the arrest one week earlier of Rabbi Yoram Abergel, the Netivot rabbi who is accused of extortion and election fraud in a conspiracy with Orthodox crime boss Shalom Domrani to throw the local elections in Netivot. Abergel and Domrani also allegedly approvingly discussed murdering one of Abergel’s rabbinic opponents or that opponent’s gabbai.

When the haredi mob saw that Jarbawi was an Arab, they allegedly surrounded the car and began to stone it, police say.

Injured in the face, Jarbawi was able to escape get to a hospital.

Abergel, who was released to house arrest yesterday, founded a hybrid form of Sefardi haredi Orthodoxy that is a blend of traditional Sefardi-Mizrahi observance on one hand and the teachings of the Chabad and Breslov hasidic movements on the other.

Last Sunday, Abergel was about to board a flight to China, reportedly to visit a Chabad House there, when he was arrested.