"Jewish communities — both in Israel and the Diaspora — sometimes are held to a lower standard. Despite emerging evidence of widespread, appalling sex abuse within fundamentalist orthodox Jewish communities, this problem gets only sporadic [media] attention, especially compared to the massive media onslaught that accompanied the Catholic sex-abuse cases that have emerged since 2002. [But this must change.]… All patriarchal religious traditions that make a fetish of separating the sexes, that entertain phobic and repressed attitudes to human sexuality, that privilege group solidarity over the well-being of children, and that treat women as debased creatures who cannot be trusted to walk among us, except under wig or veil, must be subject to the same scrutiny." 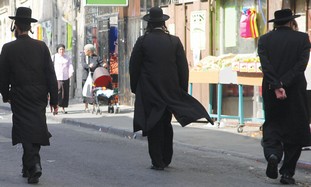 When I speak to Jewish audiences, I often am asked about the “double-standard” that exists in the media. Israel, they complain, is held to a higher human-rights standard than any other country in the world. And they’re right.

But in another respect, Jewish communities — both in Israel and the Diaspora — sometimes are held to a lower standard. Despite emerging evidence of widespread, appalling sex abuse within fundamentalist orthodox Jewish communities, this problem gets only sporadic attention, especially compared to the massive media onslaught that accompanied the Catholic sex-abuse cases that have emerged since 2002. In part, this is because Jewish whistleblowers are shamed, harassed and effectively excommunicated. In the New York City area, where North America’s fundamentalist Jewish sects are concentrated, local politicians and prosecutors have been pressured to ignore the pleas of abuse victims, lest they bring dishonor to their communities.

The Catholic Church hierarchy once approached the problem of abusive priests in the same unconscionably negligent way. But the scandals of the last decade have forced it to change. Reporting protocols have been put in place, and pedophile priests are no longer simply shuttled around from posting to posting. With few exceptions, no such reforms have been put in place in fundamentalist Jewish communities: Too many local rabbis still try to hush up pedophilic sex crimes and discourage investigation by outside authorities. (This summer, a Montreal’s Orthodox Jewish religious court informed parents that they should tell a parent or rabbi of they have been sexually molested, which counts as progress. But the court pointedly neglected to instruct parents of their obligation to report serious incidents to the police or youth-protection officials.)

Brooklyn’s Hasidic community has served up a number of troubling case studies in recent years. These include Baruch Lebovits, a Hasidic cantor whose 2010 conviction on eight counts of molestation recently was overturned on technical grounds (he likely will be retried in 2014). Lebovits’ sexual habits reportedly were widely known in his community for years. But the state prosecuted him only after a Hasiddic whistleblower, Sam Kellner, went public with claims that Lebovits had groped his son. For his troubles, The New York Times reports, “Kellner found himself denounced on the street and barred from shul [synagogue]. His business suffered; [and] he pawned his silverware last year.” (Kellner also has been embroiled in his own protracted legal saga, whose details are too complex to summarize in this space.)

Another whistleblower is Rabbi Nuchem Rosenberg, who once was a leading member of Brooklyn’s Satmar community (a particularly backward-looking, anti-Israeli, patriarchal strain of Hasidim), but has since been exiled because of his activism against what he describes as rampant pedophilia within the Satmar community. (In 2012, he was attacked outside of a fish store by a fellow Hasidic community member, with a glassful of what he believes was bleach.)

The New York Times, to its credit, has published some useful reports on Kellner, Rosenberg, and the few other whisteblowers within the Hassidic ranks. But in general, the media coverage is a pale shadow of the front-page bombshell treatment that every new Catholic sex-abuse revelation got. Many Jewish journalists feel a misguided Fiddler-on-the-Roof sentimentality toward fundamentalist Jewish communities, and non-Jewish journalists often are scared off by the task of investigating groups that seem hostile and cultish to outsiders.

But not all journalists have been scared off. This month, Vice.com ran a lengthy interview with Rosenberg, in which he described an appalling scene from a ritual Jewish bathhouse in Israel, where child-rape is, by his report, a tacitly accepted practice among some of the older men.

“Rabbi Rosenberg believes around half of young males in Brooklyn’s Hasidic community … have been victims of sexual assault perpetrated by their elders,” Vice.com reports. “Ben Hirsch, director of Survivors for Justice, a Brooklyn organization that advocates for Orthodox sex abuse victims, thinks the real number is higher. ‘From anecdotal evidence, we’re looking at over 50 percent. It has almost become a rite of passage.’”

“Ultra-Orthodox Jews who speak out about these abuses are ruined and condemned to exile by their own community,” Vice.com’s Christopher Ketcham adds. “Dr. Amy Neustein, a non-fundamentalist Orthodox Jewish sociologist and editor of Tempest in the Temple: Jewish Communities and Child Sex Scandals, told me the story of a series of Hasidic mothers in Brooklyn she got to know who complained that their children were being preyed on by their husbands. In these cases, the accused men ‘very quickly and effectively engage the rabbis, the Orthodox politicians, and powerful Orthodox rabbis who donate handsomely to political clubs.’ The goal, she told me, is ‘to excise the mother from the child’s life.’ Rabbinical courts cast the mothers aside, and the effects are permanent. The mother is ‘amputated.’ One woman befriended by Dr. Neustein, a music student at a college outside New York, lost contact with all six of her children, including an infant she was breastfeeding at the time of their separation.”

Western Muslims, in particular, might be especially curious why there is not more attention paid to these Jewish fundamentalist practices. Whenever some controversy emerges over the cloaking of women or the disparagement of “infidels” by fundamentalist Muslims, I often receive emails from right-wing bloggers claiming that this is but one step on the Islamist path to the complete Sharia-fication of North American society. And it is true that an obsessive patriarchal domination of women, especially in the public sphere, is a hallmark of retrograde interpretations of Islam. But the same goes for fundamentalist Judaism: Any religious sect that imposes crippling taboos on healthy sexual interaction between adults will inevitably breed a culture of sexual abuse and perversion.

Which brings us to the profoundly creepy tradition by which Hasidic women are expected to shave their heads, and live out their married lives as bald women, in deference to an absurd interpretation of Jewish scripture. Earlier this month, a brave female exile from the Hasidic community in New York, Frimet Goldberger, went public with her disgust at this practice. The most memorable part of her account comes when she describes her meeting with the Va’ad Hatznius — a sort of Taliban-like Committee of Vice and Virtue that purports to judge God’s will in regard to female modesty — after word had spread within the community that she secretly carried an unshaven head of hair under her turban. During the entire proceeding, the chief of the group kept his right hand in front of his eyes, to shield himself from Ms. Goldberger, lest he contaminate himself visually with her wanton harlotry, and directed his comments only to her husband. In a move straight out of Saudi Arabia, the Va’ad Hatznius indicated that it would soon be spending a female inspector to Goldberger’s house, to examine what lay under her turban.

What’s worse, her son was being expelled from the local Jewish education system: A letter arrived indicating that he was being thrown out “because of my failure to dress in accordance with the stringent [modesty] rules of the holy shtetl.”

That was five years ago. “Many lifestyle changes and adjustments later, I no longer cover my hair as many of my Orthodox peers do, and I am no longer capable of accepting, let alone understanding, the practice of forced head shaving, much less the threats and intimidation used to maintain it within the community,” she now reports. “But I am grateful for the fact that this very last, most personal violation of mine led my husband and me to gather the strength to take control of our lives and to make decisions for ourselves, our children and for me — my own body.”

Both Montreal and Toronto have Hassidic communities doctrinally connected to their counterparts in New York and Israel. The rules of public life among these groups often is dominated by Rabbis held who become de facto cult leaders, prompting vicious propaganda struggles and excommunication campaigns. In the Quebec community of St. Agathe, Lev Tahor, a small cult-like group of fundamentalist Jews led by an eccentric rabbi (and convicted child kidnapper) named Shlomo Helbrans, has been dogged by abuse claims for years. (In fact, according to The Times of Israel, members of the group left their compound this month out of fear that their children would finally be removed from their households.)

“Members who have left the group described a diet of dough, goose eggs and goat’s milk, but no fruits and vegetable,” the newspaper reports. “There are regular beatings, long prayers, and for the girls, dark clothing covering all but the face, and household servitude. Children, including babies and toddlers, are removed from their parents to live with other families, often repeatedly. Girls are routinely married off at 14, in some cases to men more than twice their age … Tahor’s written regulations describe women as disgusting and deserving of isolation and a subsistence diet. A husband may hit his wife for disobeying the ‘rebbe’s’ teachings.”

Since the dawn of modern feminism, social liberals have sought to liberate women from the clutches of conservative Christian doctrines that keep them under their husbands’ thumbs. Since 9/11, a similar project has been underway in regard to Muslims. It is time to take a broader view toward this project. All patriarchal religious traditions that make a fetish of separating the sexes, that entertain phobic and repressed attitudes to human sexuality, that privilege group solidarity over the well-being of children, and that treat women as debased creatures who cannot be trusted to walk among us, except under wig or veil, must be subject to the same scrutiny.

"Jewish communities — both in Israel and the Diaspora — sometimes are held to a lower standard. Despite emerging evidence of widespread, appalling sex abuse within fundamentalist orthodox Jewish communities, this problem gets only sporadic [media] attention, especially compared to the massive media onslaught that accompanied the Catholic sex-abuse cases that have emerged since 2002. [But this must change.]… All patriarchal religious traditions that make a fetish of separating the sexes, that entertain phobic and repressed attitudes to human sexuality, that privilege group solidarity over the well-being of children, and that treat women as debased creatures who cannot be trusted to walk among us, except under wig or veil, must be subject to the same scrutiny."