« Bill That Would Have Made It Illegal To Form A Coalition Government Without Haredi Parties Fails First Knesset Reading | Main | In Another Blow To African Refugees, Israel Violates International Law And Agreements, Will Deny All Foreigners Born In Israel Birth Certificates »

Israel’s High Court of Justice ruled Wednesday that Attorney General Yehuda Weinstein and the State Prosecutor's Office have three months to explain to the High Court why Rabbis Yitzhak Shapira and Yosef Elitzur, the authors of the racist book Torat Hamelech, were not indicted and put on trial for inciting racism and violence. 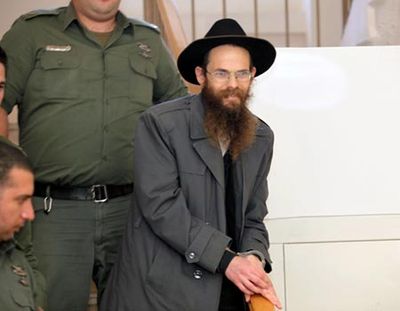 Israel’s High Court of Justice ruled Wednesday that Attorney General Yehuda Weinstein and the State Prosecutor's Office have three months to explain to the High Court why Rabbis Yitzhak Shapira and Yosef Elitzur, the authors of the racist book Torat Hamelech, were not indicted and put on trial for inciting racism and violence, Israel Hayom reported.

Among other things, the book makes the claim that babies of enemies can be intentionally murdered by Israeli soldiers because those babies will grow up to hate Jews.

Shapira, a Chabad rabbi, and Elitzur are both disciples of extremist Chabad Rabbi Yitzchak Ginsburgh and a rosh yeshivas at the yeshiva, Od Yosef Chai, Ginsburgh founded in the West Bank. Ginsburgh endorsed their book as did Rabbi Dov Lior, who is considered to be the ‘chief rabbi’ of extremist West Bank Jewish settlers.

The Israel Religious Action Center and the Coalition Against racism in Israel petitioned the court to take action after Weinstein decided in May of last year not to prosecute all four rabbis and allegedly refused to answer questions from the petitioners regarding those decisions.

Along with explaining his decision not to prosecute Shapira and Elitzur, Weinstein will also have to explain why he not prosecute Lior and Ginsburgh.

Yuval Roitman, a state’s attorney, reportedly told the court in Weinstein’s defense that Weinstein, "even as he announced his decision [not to prosecute], said the book ‘should be condemned and denounced.’”

In the same High Court of Justice hearing, Roitman reportedly said the State Prosecutor's Office intends to indict Avraham Binyamin and Joshua Hess, the editors of the far-right Kahanist HaKol HaYehudi (The Jewish Voice) website, for incitement to violence and racism, Ha’aretz reported.

One of the allegedly illegal articles posted on the HaKol HaYehudi website is reportedly an essay entitled “Mutual Guarantee” written by Elitzur, the coauthor of The King’s Torah.

Roitman told the High Court that while the website’s editors would be indicted, a final decision to indict Elitzur has not yet been made.

Roitman also tried to claim that Elitzur’s and Shapira’s book was not illegal when taken in context.

“The picture rising from the book is different from certain quotes my colleagues have cited and the book must be read in full to understand the general context it was written in. It’s difficult to contradict the context as part of the criminal procedure…the book in general does not speak in a concrete, tangible way. Nor does it deal in a concrete, tangible way with the Palestinian public or the Israeli Palestinian conflict. We must look at it in a criminal context…when I read the book I cannot deny the possibility that it means to conduct a halakhic clarification without saying explicitly that gentiles equal Arabs. Before issuing an indictment we must consider whether the book establishes this statement above all reasonable doubt,” Roitman said.

The book talks about all non-Jews and defines killing them in a time of war – which the authors also make clear applies to Israel now and when the book was published.

Non-Jews who are enemies by virtue of belonging to a people, community, or religion or by living in a geographic entity that is at war with the Jewish people either through conventional warfare or terrorism are defined in the book as people who can be intentionally murdered by Jews even if they are non-combatants, even if they are infants sleeping in their cribs.

Roitman’s claim essentially is that because Elitzur and Shapira approved murdering non-Jewish civilians and infants but did not specify murdering Arab civilians and Arab infants, no incitement to racism and violence took place – a claim at least one High Court justice found incredulous.

Israel’s High Court of Justice ruled Wednesday that Attorney General Yehuda Weinstein and the State Prosecutor's Office have three months to explain to the High Court why Rabbis Yitzhak Shapira and Yosef Elitzur, the authors of the racist book Torat Hamelech, were not indicted and put on trial for inciting racism and violence.