I’ll Ask All Haredim To Dodge The Draft If Draft Dodging Is Criminalized, Haredi MK Says 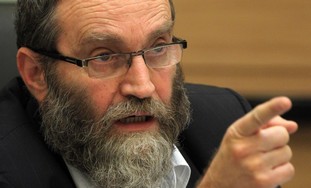 Member of Knesset Ayelet Shaked of the Zionist Orthodox Habayit Hayehudi Party, who chairs the Knesset committee on equalizing Israel’s military burden, backed financial penalties for haredim who dodge the military draft but opposed criminal penalties, claiming they would have a negative impact on the haredi community, Israel Hayom reported.

"Our goal is that, eventually, as many haredim as possible will enlist and then enter the workforce. The haredim have made it clear that within their community, imposing criminal sanctions would be tantamount to calling a Torah student a criminal,” Shaked reportedly said. Many MKs fear that instituting criminal penalties for haredi draft dodging would criminalize almost the entire haredi community which objects to serving in the military on idealogical grounds.

"If the new law imposes financial sanctions on those who do not enlist rather than taking criminal action, it will lead to the destruction of the people's army model,” MK Ofer Shelah of Yesh Atid reportedly said.

Speaking at the Sderot Conference held in Sapir College, MK Yaakov Perry, the Yesh Atid MK who headed the ministerial committee which drew up the proposed draft bill, reportedly said that criminal sanctions are “the central pillar” of the proposed law.

“Any attempt to prevent the implementation of obligatory service will encounter uncompromising opposition from us,” Perry reportedly said.

For its part, the IDF said that getting haredim into the army was imperative.

"The haredim stand to make up a substantial part of the draft classes in the coming decade. If the state does not work to advance the haredi draft in the coming years, the people's army model will collapse,” the IDF’s representative, General Gadi Agmon, reportedly told the committee.

Haredi political and rabbinic leaders staunchly oppose drafting haredi yeshiva students be they 18-years-old or 50-years-old or any age in between.

I’ll Ask All Haredim To Dodge The Draft If Draft Dodging Is Criminalized, Haredi MK Says