But those 14 Lev Tahor cult children were not in court yesterday, either. They were in a small rural Ontario town with their families and the rest of the Lev Tahor cult – being protected from that Quebec court decision by ignorant local law enforcement. 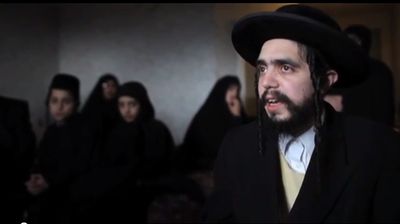 ST-JÉRÔME — A Quebec Court judge has ordered the removal of 14 children aged 2 months to 16 years from the ultra-Orthodox sect Lev Tahor, to be placed in foster homes.

Judge Pierre Hamel issued the ruling Wednesday night, ordering the children be removed from the community and placed in foster homes immediately, for at least 30 days. He ordered members of the Lev Tahor community to refrain from contacting the children in any way, except for their parents, whose contact will be supervised by youth protection officials. Among the children ordered removed are a 16-year-old girl and her 2-month-old baby.

Each child will be given a full examination by a doctor, and their psychological needs will be assessed. Youth protection officials have alleged extreme neglect and malnutrition, as well as isolation, and a refusal by sect members to adhere to the Quebec curriculum. They claim the children, who are home schooled, are unable to do basic math, and don't understand English or French.

There is a publication ban on evidence presented Wednesday in court.

On Tuesday, a committee in Israel's parliament, the Knesset, heard gruesome details about the conditions in the sect from several former members. The website Behadrey Haredim reported that the hearing was told that children were hit with iron bars, denied food and forced to take psychiatric pills. The committee also heard that the sect achieved compliance by inflicting constant pain, by forcing members to wear shoes smaller than their shoe size. Members also spoke of forced divorce and marriage from the age of 14, involving age gaps, including a 15-year-old boy marrying a 40-year-old woman, and vice versa. The minimum legal age of marriage in Canada is 16.

Wednesday's ruling followed a petition from Quebec's youth protection officials for an emergency ruling by the court after about 200 of the 240 members of the sect moved from Ste-Agathe-des-Monts to Chatham, Ont., in the early hours of Nov. 18, just before a youth court hearing. The three families of the children involved were ordered to appear in court on Wednesday morning, but they defied that order.

Speaking from Chatham, Uriel Goldman, a director of Lev Tahor, said members would defy the order because the Quebec Court has no jurisdiction in this matter, since the order to appear was issued after the group members moved to Ontario.

"It's a legal argument and they don't have to go there," Goldman said. "When the court papers were filed, it was when these families were already residents of Ontario."

Another member of the sect told The Gazette Tuesday from Ste-Agathe the community members left Quebec because the province's home-schooling regulations are too strict. He denied that there was any neglect suffered by the children. He said the whole ordeal has been orchestrated by authorities in Israel who persecute the group, because it denounces the formation of the state of Israel.

"(The youth protection director) was under tremendous pressure to find something in our houses because he got hundreds of phone calls and faxes from those people who persecute us for nothing," he said.

Denis Baraby, the director of youth protection services for the Laurentians, said extricating the children from Ontario may be tricky, but it's something the agency deals with often.

"Ontario authorities can take this decision now and get an order from a court," Baraby said. "We think there is a high possibility they will return them here."

Baraby said several families from the Jewish community have come forward to offer their homes for the children. The children have specific needs, since most only speak Yiddish and Hebrew.

THE WINDSOR STAR CONTRIBUTED TO THIS REPORT.

However, in rural Ontario, severe abuse of children apparently is no raeson for the government to step in and take action:

Life is beginning to settle down for the Lev Tahor group who arrived in Chatham last week from Quebec.

Mayer Rosner, the 37-year-old director of the ultra-orthodox Jewish group, said members of the community have gone to great lengths to make them feel welcome.

“We got a group of women, 50- 60-year-old Christian women, who came to welcome us and give us their blessing,” Rosner said. “People came to say hello and (state) 'We don't believe in all the stories on the news.' 'We love the Jewish people' and 'Welcome to Chatham.'”

Deb Bohz, who's family owns Spurgeon Villa, where a vast majority of the Lev Tahor community has settled, said the group has been nothing but pleasant.

“(Everyone is) really good, waving to each other and saying hi,” said Bohz. “There is an adjustment for them (Lev Tahor) too and they've got to get to know us and we've got to know them.”

Rosner said the group is bringing some economic benefit to the area.

“We are bringing business to the Chatham people,” he said.

“Two hundred more people to the city, it does something, maybe not a major difference, but 200 people is not bad for the city,” he added.

The group is interested in finding an institutional building surrounded by homes to move their community to.

Until then, Rosner is searching for 10-12 homes to rent for families living in hotels until long-term accommodations can be secured.

“I'm a little surprised that some people are refusing, because of the news,” said Rosner. “They think we are bad people, it makes it a little bit difficult. People don't need to be afraid.”

Quebec social services allege there were a host of concerns with the children including hygiene, health and education levels not being met.

The fathers of the two Lev Tahor families under investigation did not appear in the Quebec court on Wednesday, instead choosing to be represented by a lawyer.

Chatham-Kent Police Chief Dennis Poole said police have been out to meet with Rosner and the community members a number of times to reassure themselves and child protection officials the children appropriately cared for.

“That's our main concern and the main concern brought to our attention,” said Poole. “There are no causes for concern from our perspective at this point in time.

“There are number of legal differences between Quebec and Ontario, and we would take the appropriate action, if and when it is required,” the chief added.

Rosner said the group chose to abandon their homes in Sainte-Agathe des-Monts and move to Ontario because the province respects the Charter of Rights and Freedoms.

Men and women who are part of Lev Tahor do not interact in the same ways as most Canadians would expect, said Rosner. Men and women do not shake the hands of the opposite sex and they are educated and worship separately.

“It's OK, people can come and ask us questions,” said Rosner. “We are very friendly people and open-minded people.”

• Lev Tahor is run by a convicted felon who kidnapped a child and brainwashed him.

• Israel considers Lev Tahor to be a dangerous, unsafe environment for children and Israel's Knesset heard Tuesday about Lev Tahor children struck with iron bars at the order of cult leaders.

• Lev Tahor's spokesman promised that two Lev Tahor cult family heads would return to Quebec for yesterday's court hearing. But they did not do so. Why?
• Perhaps because at that hearing held yesterday, the Quebec court ordered 14 Lev Tahor children from those two Lev Tahor families – children who are now in Chatham – to be placed into foster care. Youth protection workers had dealt with years of complaints of abuse and found no other way to handle the situation.
But make no mistake about it. There are far more than 14 Lev Tahor children who should be removed from their homes and from that cult.
It is excruciatingly difficult in Canada to remove children from their homes when no one calls police to report abuse.Without police reports or medical records to rely on, courts are essentially hamstrung.
Withholding a proper education from the children is easier to assess and, if prolonged, easier to act on because the province oversees homeschooling – which is why this is the basis for the Quebec action against Lev Tahor. It will take years for a similar file to build up in Chatham and concrete action to be taken.
And when that looms near, Lev Tahor will flee again – and the children will continue to suffer harm because a small town police chief with no real training in these issues has essentially decided to start the clock over again.
You know those Canadian home improvement shows where Laurent and Mastique or Lionel and Fiona haven't had a working bathroom for more than a year because, like any good Canadian, they tried to remodel it themselves and now when the toilet flushes the kitchen sink overflows with wastewater?
This is it in real life, writ large.
Except when Police Chief Dennis Poole flushes his toilet, Lev Tahor children drown.

But those 14 Lev Tahor cult children were not in court yesterday, either. They were in a small rural Ontario town with their families and the rest of the Lev Tahor cult – being protected from that Quebec court decision by ignorant local law enforcement.