Today is the 381st birthday of "the world's first secular Jew." Who is he? 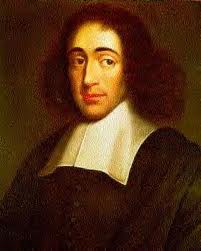 He's Baruch Spinoza, the son of Portugese Conversos who returned to Judaism as they were fleeing to Amsterdam. Spinoza was born in the Jewish quarter of Amsterdam on November 24, 1632.

Excommunicated on July 27, 1656, "Spinoza left Amsterdam, and no longer lived the life of an observant Jew. Yet, he also did not adopt another religion. Although he moved several times, he spent the last years of his life in The Hague, where he pursued the profession of lens-making and devoted the rest of his time to thinking and writing. He died on February 20, 1677, probably from an illness connected to the glass dust he inhaled from his lens-grinding," Ha'aretz reports.

His writings were published after his death and made him perhaps the world's best known philosopher.

"[H]e denied the existence of a God who directly involved in history; his God was impersonal, perhaps co-equal with nature. The human soul, apparently, was not immortal. The Scriptures were written by humans, not God or his agent Moses."

Today is the 381st birthday of "the world's first secular Jew." Who is he?