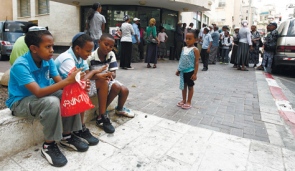 Darchei Noam is reportedly considered to be one of the most prestigious Orthodox grade schools in the Israeli city of Petah Tikva. After years of resistance from it and other two other local schools, it was forced to enroll Ethiopian Jewish students four years ago.

But what followed was not four years of high quality education for those new students. In many cases, what reportedly followed was almost no education at all.

This week, some Darchei Noam students told Ha’aretz that during exams, Ethiopian children are told to leave the classroom. They go to the library and do worksheets or play while their non-Ethiopian classmates take the exams.

Ethiopian Darchei Noam students are also reportedly given artificially high grades that do not reflect their actual level of learning. When they try to get into good junior high schools they are turned down after doing poorly on entrance exams, and they don’t understand why.

“It started two years ago. They told us, ‘Ethiopians, go to the library when the teachers gives tests in English, math and geography…We didn’t ask why we need to go the library while the other students stayed in the classroom. I thought they wanted to help us. They give us worksheets, then we go back to class,” a female student told Ha’aretz.

The removal of Ethiopian students from the classroom during exams was also confirmed to Ha’aretz by a nonprofit organization that assists the school.

Some of the younger Ethiopian children at Darchei Noam are not taken out of classrooms during exams, but that may be because they are so young, it isn’t yet necessary to remove them, an employee of the state education system reportedly told Ha’aretz.

“[Removal of Ethiopian students during exams] happens in different classes at Darchei Noam and in other places in Israel. It’s just not talked about. No one denies that there are educational gaps between the Ethiopian and the Israeli students. The question is how they’re dealt with. At Darchei Noam, in many subjects they don’t let the students take the tests like everyone else because they assume that they are unable. The students are happy to get good grades or positive feedback, and the parents are satisfied. But it’s a time bomb that goes off when the children advance to middle school,” the state educational system employee reportedly said.

“Genuine exams would reveal the depth of these gaps, and then someone else would demand that the schools take care of them. Giving fake grades is a way to evade this,” the employee said.

The Darchei Noam receives 75% of its funding from the government. Currently, there are some 700 students at the school, many of whom are Mizrachim (Sefardim). About 50 are Ethiopian.

“Everyone sits together and takes tests together, but the question is, what is the level of learning? If there is a fifth-grader who is at a first-grade level, then he shouldn’t take a math test [with his classmates.] I’ve got excellent Ethiopian students, and I’ve got weaker Israeli students as well, and they won’t take exams with their classes. If someone’s going to the library, it’s not because they are Ethiopian but because they’re on a different academic level.…

“As a principal, I will not let any child receive a grade of 20 or 40 on their report card. I don’t want them to feel as if they’ve failed. We have entrance exams for every student. I won’t take Israelis [on a lower level], but I take Ethiopians because otherwise I’ll be called racist. But it’s not right, educationally. Children like these need a great deal of assistance from the Education Ministry to help close the gaps. In a private school, with students who have been immersed in the material for years, its just not practical,” Unger reportedly said.

Four years ago, Darchei Noam and two other Petah Tikva schools refused to accept dozens of Ethiopian students, alleging that they did not have a high enough level of Torah education. The government had to force the schools to take the Ethiopian students.

In 2010, Israel’s Supreme Court ruled that a lack of specialized Torah education is not a sufficient reason for a school to reject a potential student.

“[T]hese children are educationally abandoned, no one is working for them. The private schools receive funding from the Education Ministry, but there is no oversight. The government decided to send our children to schools like these. It’s their responsibility to investigate what is going there,” Ziva Mekonen-Dagu, a vice president of the Israel Association for Ethiopian Jews, reportedly said.