The baby was reportedly found dead at a Rockland County recycling center last Tuesday wrapped in a $400 long black “haredi-style skirt” with a label reading “Exclusive Misook” and stuffed inside a plastic bag. The skirt is reportedly sold only in two stores that cater to haredim, one in Kiryas Joel and the other in Monsey, but it could also have been obtained at the Metzias Place, a local haredi thrift store.

The baby boy’s umbilical cord was attached. The child was reportedly less than one day old.

Police believe the baby boy was full term, born aliveand of Hispanic descent and are seeking information about any women who were recently pregnant but now not pregnant and are without a new baby.

“The baby is believed to be of Spanish origin, but the skirt it was wrapped in leads us to believe that the mother may have been employed at a Jewish home. We understand that in many Jewish homes they often provide their cleaning help with skirts to wear while they work. We are also aware that in many Jewish homes, they don’t want pregnant workers working for them. If this woman was a housekeeper in a home like this, she might have gone to great lengths to conceal that pregnancy and her employers may not have even been aware that she was pregnant.…I have been here for 33 years and have only seen one other case similar to this one,” Spring Valley Police Detective Peter Claussen reportedly said.

No information is reportedly known about the baby's father.

Investigators reportedly found lottery tickets in the bag along with the dead child. They traced those tickets to Maple Deli, a kosher delicatessen in Spring Valley, and say they know with certainty that the bag and baby were thrown into a dumpster at the deli. Sometime after that the contents of the dumpster were collected and hauled to the recycling center where the dead baby was later found.

Police reportedly suspect that a haredi family employed the woman as a housekeeper and gave her the skirt so she could dress according to haredi modesty standards. They also think the skirt hid her pregnancy. Police also believe the dead baby's mother also concealed her pregnancy because haredi families dislike hiring pregnant housekeepers.

Crime Stoppers is offering $2,500 for information about the child’s mother. 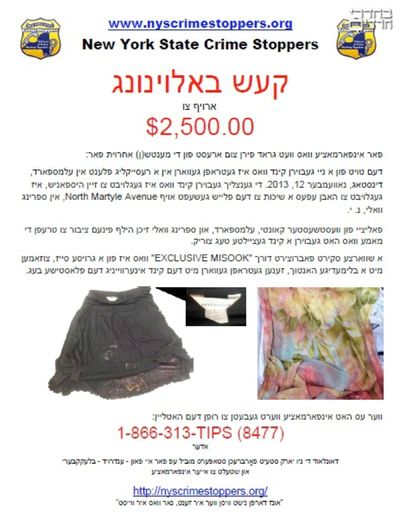