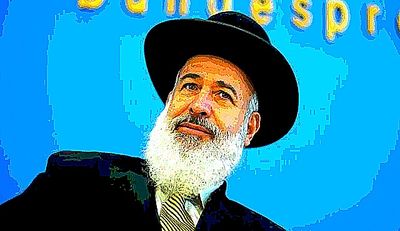 According to Ynet, all four Israeli haredi daily newspapers - Yated Ne'eman, Hamodia, Hamevaser and Hapeles – “did not write a single word” about the arrest of former Ashkenazi Chief Rabbi of Israel Yona Metzger earlier this week on fraud, breech of public trust, obstruction of justice, money laundering and embezzlement charges, while haredi radio stations maintained a near-complete cone of silence about the arrest and the charges against Metzger with only two exceptions: Yedidia Meir of Radio Kol Hai mentioned the arrest on the morning show and Avi Mimran of Radio Kol Barama reportedly attacked "the recent phenomenon of arresting rabbis" during the station’s main news broadcast, but did not explain who are what he was referring to.

"Dealing with this criminal affair is disrespectful to the haredi and religious listeners of Kol Hai, and especially to the Rabbinate institution," Bezalel Kahn, head of Kol Barama’s news division reportedly said.

"There are other issues, more interesting ones, which we are trying to fill the programs with: The assembly of the municipal coalition in Jerusalem, the Shaked Committee (on an equal share of the burden), and more. The Rabbi Metzger affair is a sensitive issue, and if there is other news – it's better to just ignore it,” another radio news editor at Kol Barama reportedly claimed.

Haredi news websites did report the arrest but with some censorship, “usually as a news report without any commentary,” Ynet reported.

“As the leading haredi website, we report on the variety of issues relating to the haredi public, and we also deal with and bring up issues which the haredi media has been ignoring so far, in light of the fact that unlike newspapers the website is not accessible to children, and this case is no different than other cases,” Haim Iluz, the editor of the Kikar Hashabat news website, reportedly explained.

The real reason haredi newspapers maintained a complete news blackout on the Metzger arrest and the charges against him is that
Metzger became chief rabbi in a backroom deal orchestrated by former Ashkenazi non-hasidic haredi leader Rabbi Yosef Shalom Elyashiv.

Elyashiv backed Metzger even though Metzger had a litany of allegations of sexual harassment and legal-ethical violations against him Elyashiv knew about before he backed him for chief rabbi.

So why did Elyashiv back Metzger?

Elyahiv’s stated reason, as first exclusively reported by FailedMessiah.com almost a decade ago, was to “restore the glory to the chief rabbinate.”

The magistrate judge who earlier this week extended Metzger’s remand reportedly noted in court that the evidence against Metzger “will make the two ears of everyone exposed to it tingle."

Posted at 10:55 AM in Crime, Litigation, etc., Haredim, Israel | Permalink