Agri Star Fire Burned For Hours Before Fire Department Called, Could Have Been Much Worse, First Responders Say 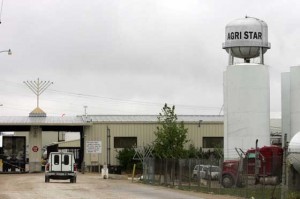 The Postville Fire Department was called Saturday morning at 2:41 a.m. but security camera footage reportedly shows the fire was already burning by 10:00 p.m. Friday night. The fire’s progress was reportedly retarded by overhead PVC water pipes that melted or broke.

If those water pipes had remained intact or been empty, it is likely the entire 350,000 square foot three floor building would have been gutted.

The Postville Fire Department was reportedly joined in fighting the fire by the Castalia, Luana, Frankville and Monona fire departments along with Decorah’s aerial firefighting unit.

The fire was reportedly under control by approximately 4:30 am CST Saturday.

Agri Star’s security staff reportedly notified the plant’s maintenance supervisor at 2:25 am that there was a problem on the lower level.

When the Postville Fire Department arrived, thick black smoke was already billowing out of the building’s lower level.

The fire – which is reportedly thought to be accidental – apparently started in a dryer which was left running unattended in the reportedly unoccupied building.

There is also reportedly no publicly available damage assessment at this time.

Agri Star Fire Burned For Hours Before Fire Department Called, Could Have Been Much Worse, First Responders Say