Women Of The Wall's Leader Compares Herself To Rosa Parks

Anat Hoffman compares herself to Rosa Parks while at the same time lauding a compromise that relegates women to the back of the bus. 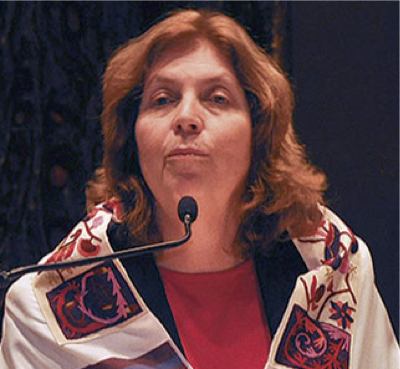 Women of the Wall's leader, Anat Hoffman, had something truly bizarre to say about her acceptance of a compromise plan for the Kotel (Western Wall) that essentially gives up on all of the group's long time goals in exchange for some control over the new egalitarian prayer area at Robinson's Arch.

“It’s as if the Alabama bus company would invite Rosa Parks for a consultation on how to run the company in future,” Hoffman reportedly said.

No, it isn't – unless Park's would have been brought on board to plan separate but equal "Negro Only" buses or had been invited to join a committee devising plans to make the "Negro Only" rear area of public buses in Montgomery nicer.

Hoffman's statement shows that she does not understand what Parks fought for – or, more likely, it shows that she is more than willing to essentially lie in order to cover up what many now see as her personal power grab.

Hoffman even went as far as to openly cede the Kotel proper to haredim last week – even though WoW had made no such decision.

“I think it’s absolutely fine that the state gives the [haredi] Kotel rabbi absolute authority over the haredi space [the entire Kotel proper prayer area]. The Haredim, after all, are a political force in Israel, but ultimately that is what will enable us to liberate the rest of wall [i.e., Robinson’s Arch, which was never a site of Jewish prayer], which is something huge.”

Ten leading members of WoW immediately broke with Hoffman and are challenging her leadership, upset by what they see as her deception and her betrayal of WoW's principals. Among that group, which as now grown to at least 21 members, is WoW's founder and many long time members.

“I’m not interested in bigger, better, nicer, I’m interested in holiness and they’re not suddenly going to impose holiness on the new [egalitarian prayer] site [at Robinson's Arch, which has never in history been a site of Jewish prayer],” Cheryl Birkner Mack, who resigned from the organization’s board in protest of Hoffman's decision, reportedly said.

These dissidents call Hoffman a "dictator" and lament her deception.

But no one has really answered the question of why Hoffman essentially sold out WoW's long time goals – and many of its long time members.

I can propose and answer to this question based on my reporting and the reporting of Israeli media.

WoW was being squeezed on two sides. First by the government, which was quietly threatening to launch the new egalitarian prayer area at Robinson's Arch without making it in any way contiguous with the Kotel proper and without creating a unified entrance for both sites. At the same time, it was signaling that it would allow the Conservative Movement to have almost complete control over the new site, formalizing what has been the de facto situation for a decade or more at Robinson's Arch. Second, WoW was being squeezed by the Conservative Movement, which was all too happy to dominate the new egalitarian prayer – even though it largely existed because of WoW's 25 years of advocacy. The Refom Movement has a relatively young, weak, naive leader and the Conservative Movement's rabbis are led by a woman who WoW could not fully trust.

Into that toxic mix comes Israeli politics as usual, the payoffs and special considerations that make much of what passes for Israel's democracy flow. Hoffman gets to be a victorious "Rosa Parks" with all the political power and benefits that idea contains for those who do not know or do not care who Rosa Parks really was.

That the real Rosa Praks would never have accepted such an offer from teh Montgomery Bus Company is for Hoffman completely besides the point.

Anat Hoffman has essentially relegated women to the back of the bus in exchange for a driver's uniform, a toy steering wheel, a clown's horn and the right to decide who toots it. She reenforced segregation rather than promote equality.

Women Of The Wall's Leader Compares Herself To Rosa Parks

Anat Hoffman compares herself to Rosa Parks while at the same time lauding a compromise that relegates women to the back of the bus.