New Water Meters Turn Off On Shabbat To Accommodate Haredim 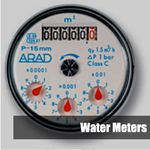 “Our ‘glatt [super-kosher] water meter’ overcomes the problem of a smart water meter operating on Shabbat. It allows us to install modern equipment in ultra-Orthodox neighborhoods to help save water, prevent leaks, and save money for residents,” Tal Tzur, the new meters’ developer Arad Technologies’ VP for Software & IT, told the Times of Israel. Tzur also noted that the new smart meters have made it unnecessary for haredim in Bnei Brak and other cities to go without tap water on Shabbat – something some extreme haredi sects endorsed as a solution to the meter problem.

WiFi connections and GPS chips built into the meters allow constant monitoring and eliminate the need to have meter readers physically check each meter regularly and keep the entire system flowing at its optimal efficiency – a very big deal in the arid Middle East where water is in short supply and therefore very expensive.

Smart meters help detect unusual usage – and therefore leaks in homes and businesses. It can also see if the water infrastructure has been tampered with  for example, by illegally tapping into the system to steal water.

Water utilities in most Western countries reportedly lose about 20% of their water; developing countries in Africa and Asia lose closer to 50%.

The West Bank town of Ariel used to lose about 18%. The new smart meters have reportedly cut that loss to just 3.7%.

WaTec recently released the world’s first iOS and Android app that allows individual consumers to take advantage of all the data their smart meters collect. Consumers can now track their own water consumption and the app sends users real-time alerts when it detects water leaks andother problems.

Smart metering is a boon to conservationists, home owners and businesses – but not to haredim. Several haredi rabbis reportedly recently ruled that using tap water on Shabbat where smart meters are in operation violates Shabbat law because it gives workers at the water utility data on Shabbat, and those workers will use that data to regulate the water system and by doing so will violate Shabbat law.

To prevent haredim from filling pots and jugs of water before Shabbat for use on Shabbat, Arad developed the special meter.

“The meter we designed for use in these areas works like other smart meters during the six days of the working week, while transmission [of data to the utility] closes itself down on Shabbat,” Arad’s Tzur reportedly said.

The haredi meters also use an old fashioned dial rather than a digital display, whose use is also a violation of Shabbat law according to some haredi rabbis.

The new haredi meters were approved by two haredi rabbis, Rabbi Shevach Rosenblatt of the “Kehillos Hareidim” kosher certification organization and Rabbi Nissim Karelitz, who is the head of of Bnei Brak’s beit din (Jewish religious court) and the son nephew of the Chazon Ish. (The Chazon Ish infamously ruled that electricity is a violation of the biblical law prohibiting building on Shabbat – a decision that is widely viewed six decades later as completely political and without any true basis in halakha, Jewish law. Nonetheless, it is the ‘normative’ reason haredi and Zionist Orthodox-Modern Orthodox Jews do not use electricity on Shabbat.)

“We have safeguards installed to ensure that the meter cannot be tampered with when it goes offline. Thanks to our solution, all Israelis can turn on their taps without being concerned about Sabbath violations,” Tzur said.

New Water Meters Turn Off On Shabbat To Accommodate Haredim