The northern city of Sefat is one of Judaism’s four holy cities – at least according to 16th century Kabbalists – and 55-year-old Viki Elkabetz’s campaign angered its large and growing haredi community. Yet Elkabetz – who headed her own party – was elected last week despite that anger, along with her list’s number two – Ethiopian Jew Arik Mangiste. 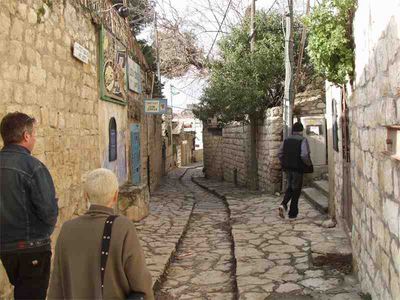 A street in Sefat's old city

A secular woman, Viki Elkabetz, and an Ethiopian Jewish man, Arik Mangiste, have reportedly been elected to serve on Sefat’s city council.

In most other Israeli cities, this would not be a shock.

But the northern city of Sefat is one of Judaism’s four holy cities – at least according to 16th century Kabbalists – and the 55-year-old Elkabetz’s campaign angered its large and growing haredi community. Yet Elkabetz – who headed her own party – was elected last week despite that anger, along with her list’s number two – Mangiste.

Elkabetz is reportedly the first woman in history to serve on the Sefat city council; Mangiste is the first Ethiopian Jew to do the same.

Elkabetz’s list reportedly won support from the Labor Party and four Labor MKs – Hilik Bar, Stav Shaffir, Isaac Herzog and Itzik Shmuli – made the long trip up to northern Israel to campaign for it.

“In Safed men control everything, and unfortunately even women haven’t encouraged other women who have tried to get elected to the city council. The fact is that I’m known, and the personal touch, are what tipped the scales, but without a doubt I received support from the secular community as well.…Unfortunately, the secular community is becoming less involved in the daily life of the city. It saddens me that they’ve become indifferent, but the votes for me show that perhaps the secular community is starting to raise its head again. At the moment, people have great expectations of me and that's a little daunting, but I’ll do my best to live up to them,” Elkabetz, who once played on Israel’s women’s national soccer team and is known for her charity work, told Ha’aretz.

In 2012, Safed had a population of 32,064. Immigrants who came to Israel from 1990 onward – many of them Ethiopians – make up 18% of the population. About one third of the city’s population is now haredi, and most of them are poor as are many of the Ethiopians.

But even with the high haredi birth rate, the large influx of haredim from elsewhere in Israel, and a large number of immigrants, Sefat’s population has reportedly stagnated since the mid-1980s – largely because non-haredi children increasingly left to find work in larger cities.

Tourism – which once was the major source of income in Sefat – has also markedly decreased as the city’s haredi population has grown.

“The choice to work with Viki was first and foremost an ideological one. I was born in Sefat, and I’ve been here through the good times and the bad times. The political roster in Sefat is quite clear: It’s all men, and most of them are haredim. It was clear to me that voting for Viki, above all, conveys a social message: We need a woman on the ‘men’s council.’ A woman’s voice must be heard. It cannot be that in a city with a population of over 30,000, most of whom are not ultra-Orthodox, there are 11 ultra-Orthodox men on the city council, out of 15 representatives. The message was clear: For Sefat to win, it needs a woman on the council. It worked, and we managed to win two seats. I believe that in another five years we can double that,” Omer told Ha’aretz.

At first, Elkabetz tried to win the support of haredi women, but stopped doing so after being chastised by a haredi woman who reportedly told Elkabetz that her campaign was inappropriate. A  woman’s place is in the home, not in politics, the haredi woman reportedly insisted.

“It pained my heart. It’s hard for me to believe that women live with this kind of mentality and this is how they raise their children. This kind of lifestyle perpetuates a sad economic reality and a life of poverty,” Elkabetz reportedly said.

The northern city of Sefat is one of Judaism’s four holy cities – at least according to 16th century Kabbalists – and 55-year-old Viki Elkabetz’s campaign angered its large and growing haredi community. Yet Elkabetz – who headed her own party – was elected last week despite that anger, along with her list’s number two – Ethiopian Jew Arik Mangiste.