« Nature Or Nurture: How DNA May Guide Our Vote – And, By Extension, Our Religious Choices | Main | Haredi Modesty Sign In Jerusalem’s Central Business District Sparks Fear, Outrage From Non-Haredim »

In the run-up to Israel's municipal elections slated to be held next week, haredi rabbis are tightening the screws on their followers to try to get every vote possible while preventing haredim from voting for non-endorsed candidates – and if that means threatening them with death, so be it. 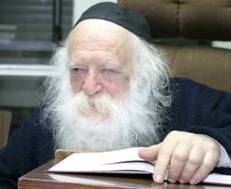 At the meeting, Rav Shlomo Kanievsky, rosh yeshiva of Yeshivas Kiryas Melech, spoke on behalf of his father, Maran Rav Chaim [leading haredi Rabbi Chaim Kanievsky], and said, “B’reshus Moronon Verabonon [with the permission of the rabbis], I am not worthy to stand before the great roshei yeshivos [yeshiva deans], but a shliach [messenger] must carry out his mission. These remarks will be a bit harsh, but I will share what I heard.

“I asked [my father] what I should say here. My father told me: ‘Tell them that it is written in the Gemara [Talmud] that those who demean the greatest leaders of the generation have no portion in Olam haba [the world to come; the afterlife].’”

Rav Shlomo added that his father, with uncharacteristic sharpness, said, “Hamevazeh gedolei hador chayov sekilah - Those who denigrate the gedolei hador [leading rabbis of the generation] are deserving of stoning.”

When Rav Shlomo asked his father about the fact that this is not written explicitly anywhere in Chazal [rabbinic sources], Rav Chaim replied that “we are talking about chillul Sheim Shomayim [desecration of the name of heaven, i.e., desecrating God's name] and this is worse than one who desecrates the Shabbos [Sabbath; willfully and knowingly desecrating Sabbath law is punished with stoning under halakha, Jewish law – although that punishment cannot be carried out without the Jerusalem Temple rebuilt, the entire Jewish court system functioning, and several other requirements met, which is why it hasn't been done in centuries], even though it is not written explicitly.”

“When I asked him,” added Rav Shlomo, “that they will say that they have different gedolim [great rabbis {they follow}], he said to me, ‘You can say that I saw how the Chazon Ish [Rabbi Avrohom Yeshaya Karelitz, a great haredi rabbinic leader who passed away in 1953; Karelitz was the elder Kanievsky's father-in-law] accompanied him to the door. There is no more to say and it is not respectful to say more.” [This appears to refer to Karelitz walking the much younger Rabbi Aharon Leib Shteinman to the door of Karelitz's house after speaking with him inside for some time. This was done by Karelitz as a show of respect for Shteinman, who is now, 60 or more years later, the supreme non-hasidic Ashkenazi haredi rabbinic leader.]

Ad kan devorov hakedoshim. [Until here are the words of the holy ones.]

While death sentences cannot (hopefully) be carried out by rabbinic courts today, rabbinic theology holds that God carries out those punishments through accidents, mortal illnesses, etc.

For those who believe haredi theology, the elder Kanievsky's statement is like a death curse.

In the run-up to Israel's municipal elections slated to be held next week, haredi rabbis are tightening the screws on their followers to try to get every vote possible while preventing haredim from voting for non-endorsed candidates – and if that means threatening them with death, so be it.