The previous government's attempt to cook the books to make haredim look more productive than they are has failed.

In August 2012, FailedMessiah.com reported that the way the (now) previous Netanyahu government counted haredim and determined the numbers of haredim who officialy work (rather than those who work on the black market or study in yeshiva full time) had been cooked by the government to make it appear as if more haredi males are working than really are.

"﻿﻿[T]wo important facts: 1) The Bank of Israel changed the way it counts haredim (or, more properly, relied on a change the government made) making its definition of who is haredi more expansive, accounting for almost all of the increase. 2) Actual economists seem to agree that the new numbers are inflated. In other words, intentionally or not, the books were cooked…"

Earlier this week, the new Governor of the Bank of Israel spoke at the Prime Minister’s Conference—Partnership and Growth. And while she did not highlight this fact, the sharp-eyed HarediAnaysis.com noticed that her presentation shows that the number of haredi males who actually work has sharply decreased since last year, down 4% from 2011's inflated claim of 45%. This decrease to 41%, hidden deep in Karnit Flug's presentation, appears to be based on the previous government's inflated figures – and that means the actual number of haredi males who work is something like 35%, give or take a couple percentage points.

But what accounts for this new decrease Flug only briefly mentioned?

It's hared to say for sure, but the strident reaction of haredi rabbinic leaders against government attempts to draft haredi males and to introduce basic math and other secular education into haredi schools may have played a significant role.

As it now stands, haredim have no democracy, no freedom, and most have no money and no way out – making them dependant on haredi rabbinic leaders and the charities and government benefits they effectively control.

Freedom and economic advancement are enemies of haredi rabbinic leadership, and that knowledge is necessary to understand why so many haredim are kept poor and ignorant.

A slide from Flug's presentation tells the story. Annotations in English red letters and the red arrows were added by FailedMessiah.com. The red oval drawn around Arab employment is Flug's. The other categories are countries: at the far right, the top two are Switzerland and Mexico; next to haredim at the bottom of the employment chart are Spain and Greece, which both chart almost 30 percentage points above haredi males. Please click to enlarge: 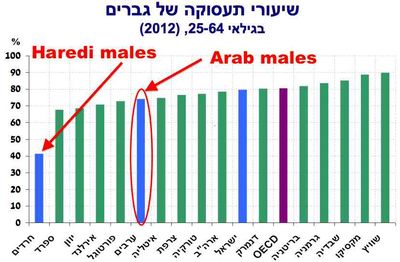 The previous government's attempt to cook the books to make haredim look more productive than they are has failed.