Sex abuse expert Michele Galietta, a professor at John Jay College of Criminal Justice, argued Project Innocent Heart has already faltered — using “intimate stimulation” instead of “sex” when describing molestation on its website. “There are a lot of mixed messages,” Galietta said. “It is so vague…”

Some or all of that money apparently sat in the coffers of the Metropolitan Council on Jewish Poverty all this time, which allegedly did little or nothing with the money for four years – something Attorney General Eric Schneiderman should add to his ongoing investigation of disgraced former Met Council CEO William E. Rapfogel, who allegedly made a career out of stealing money from the poor, and for all we know, may have stolen some of this money, as well. (If he did, look to see which politician(s) got kickbacks from it.)

Then this week, a little known haredi organization, Project Innocent Heart, was revealed to be the recipient of the money and the project's administrator in an article written by Simone Weichselbaum and published Saturday in the New York Daily News.

Weichselbaum asked Hikind why the Met Council's program, Shomrei Yeldainu (Guardians of our Children) apparently no longer has the money or administers a program while the Far Rockaway-based Project Innocent Heart, headed by Rabbi Moshe Bak, does.

Hikind did not answer her.

Like other similar haredi programs. Project Innocent Heart is very flawed, as its website shows and Weichselbaum reports, because it is haredi rabbis – not child sex abuse treatment professionals and law enforcement – who determine what these organizations do and how they go about doing it:

…Child molestation is problematic throughout orthodox Jewish neighborhoods. Victims often report traumas to their rabbis instead of speaking to cops.

“There are reputable established organizations out there that are more effective,” said Ben Hirsch, a co-founder of Survivors for Justice.

“There are a lot of mixed messages,” Galietta said. “It is so vague. It can be problematic.”

Molestation is a form of child abuse in which an adult or older adolescent abuses a child for intimate stimulation.

There is no real explanation of good touch, bad touch or anything else important for families to know, except for this, found in a different section of the website:

Explain to them that it’s a normal fact of life for individuals to interact and come into contact with each other. What isn’t normal is for people to touch each other in ways that make one another uncomfortable, confused or even frightened. If your children ever question whether someone has touched them inappropriately or not, let them know that they should speak to someone they trust. If anyone touches your child in a way they immediately know they do not like or understand, emphasize that the children have every right to say “NO” and remove themselves from the situation. Many times children feel as if they are being disrespectful or rude to an adult if they speak against them.

Further, many haredi children will automatically listen to a rabbi or a teacher or an older relative who tells them this inappropriate touch is, in fact, normal and 'kosher.'

What children need to know is that this type of touch – fondling of genitals, rubbing or thrusting against the child's body, etc. – is not okay, that it is not kosher.

Another part of Innocent Heart's website deals with tznius, modesty. It contains the message missing from other sections:

It is important that your child realizes his or her body is private and that no one should touch the parts of the body that are private, and this includes his or her physician unless supervised by the parent.

But the section on tznius also contains this gem of illogic that is sure to see dozens of haredi kids abused within their families suffer more and longer than necessary:

Here is a great opportunity to share your values on privacy (and lashon horah if you want). You may want to say, “It is not tznius to discuss the private things that happen in your house or someone else’ house for that matter. I hope yidden keep their personal matters to themselves.”

According to a mental health professional specializing in child maltreatment, children who have internalized the concepts of privacy and discretion are less likely to develop relationships with children who behave and speak inappropriately and are less likely to become victims to molestation and unfitting behaviors. Their intrinsic discomfort with a lack of tznius or inappropriate chat naturally causes them to distance themselves from those who act or speak inappropriately.…

Perhaps Innocent Heart's workshops do a better job of educating families and children?

Attending one of our workshops is the best way to become more informed about child abuse and what you can do to identify warning signs and help. These presentations allow you to learn and ask questions either in a group setting or one on one. They also can supply you with materials to take with you and share with others.

Our website is also another great way to get information and learn about even more resources available that can keep everyone up to date on the most accurate ways to deal with the issue of child abuse and maltreatment in the Jewish community.

Even more egregious is this quote:

How can I know if a child is being abused?

Because this problem is often hidden from view it goes unnoticed and becomes even more tragic when untreated and ignored. In order for people in the community to see the issue, they have to understand the warning signs. Our materials offer a simple overview of things to be aware of, but a deeper understanding is necessary to truly combat the problem and our workshops are specially equipped to provide you with ways to identify if a child is being harmed. By attending even one workshop you can learn enough to save many lives. Isn't it worth it?

So what about Project Innocent Heart's workshops? Surely they must be held with some frequency?

And then we have this laughable one page handout on preventing child abuse, which doesn't mention child sexual abuse at all. Please click to enlarge: 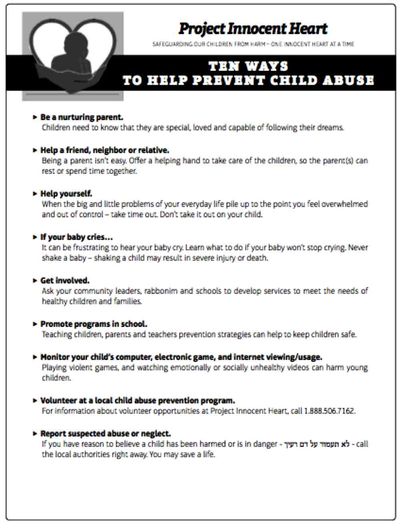 Dov Hikind should be ashamed. So should the Metropolitan Council on Jewish Poverty and Rabbi Moshe Bak. And every one of them should be investigated by Schneiderman and criminally prosecuted if these funds were misused, as they appear to have been.

Sex abuse expert Michele Galietta, a professor at John Jay College of Criminal Justice, argued Project Innocent Heart has already faltered — using “intimate stimulation” instead of “sex” when describing molestation on its website. “There are a lot of mixed messages,” Galietta said. “It is so vague…”