In most jurisdictions in the country, this would be seen as an unacceptable conflict of interest. In the Brooklyn of Charles J. Hynes, it is business as usual. 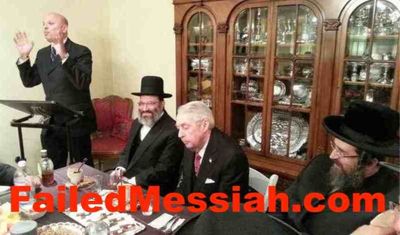 This photo was taken recently at a fundraiser for Brooklyn D.A. Charles J. Hynes.

Arthur Aidala, notorious accused molester Rabbi Baruch Lebovits' defense attorney, is speaking. The Lebovits case is still open, and Hynes has repeatedly said he intends to retry Lebovits, who was convicted of molestation but later freed on a technicality.

Next to Hynes on the left is nursing home owner Abish Greenbaum. Greenbaum's uncle is Wolf Zicherman, the rosh kollel of Munkatch. Greenbaum was Samuel Kellner's deputy when Kellner was the CEO of Munkatch. Kellner broke with Munkatch and reported child sex abuse to Hynes, and Munkatch has demonized Kellner since then.

Now Hynes is prosecuting Kellner on what observers, including the New York Times, see as very questionable charges 'supported' by extremely weak (and often completely nonexistent) evidence. Hynes has delayed Kellner's trial several times in a successful attempt, legal observers say, to delay it past the November election. Kellner has repeatedly fought against those Hynes' delays.

On Hynes' right side is Chaim Luzer Rabinovich, the Munkatcher Rebbe's oldest son. He was the principal of the school when the boys in the Lebovits case were allegedly molested by Lebovits in its basement mikvah. (Meyer Lebovits, Baruch's son and also himself an alleged pedophile, was the deputy principal of the school when that abuse allegedly took place.)

The Munkatcher Rebbe is the go-to person in the haredi community for accused and convicted criminals – especially sex offenders. He specializes in finding the best defense attorneys and in working out special defense strategies, appeals and suggested sweetheart plea bargains – many of which Hynes allegedly accepts. The Hynes campaign used the Munkatcher's image and endorsement in large posters and flyers during the primary campaign and on election day itself, when Hynes had a very large version of that image and endorsement displayed by campaign workers in hasidic neighborhoods in Borough Park.

In most jurisdictions in the country, this would be seen as an unacceptable conflict of interest. In the Brooklyn of Charles J. Hynes, it is business as usual.