Animal Abuse At Soglowek Kosher Slaughterhouse Could Have Made Chickens And Turkeys Treife, Chief Rabbi Says 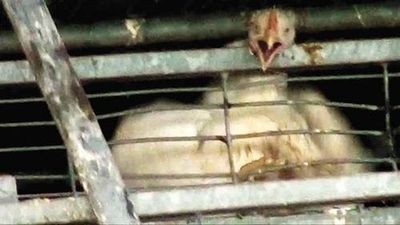 The slaughterhouse reportedly kills about 30,000 chickens and turkeys per day, the Jerusalem Post reported.

Bar is also an animal welfare activist active in the Anonymous for Animal Rights NGO.

Chickens at Soglowek were kept for up to 19 hours in tiny, overcrowded, feces-filled cages. A significant number of those cages were also broken and rusty. Many chickens were reportedly left injured inside these cages, deprived of food and water. Some had wings or even their heads trapped in between the cages’ rusty, bent bars.

The cages were moved by forklift to a machine that literally throws the chickens down – sometimes from great height – to a conveyor belt that transports them to the kill floor. Some chickens are left hanging for a prolonged period of time with their legs, wings or necks trapped between the bars of the cages. They are eventually freed by a slaughterhouse employee who pulls them out of the cages and throws them onto the conveyor belt.

“We cannot remain indifferent to these awful pictures. There is a legal and moral failure here, and these phenomena ultimately only will financially harm any offenders who do not meet the required instructions,” Peretz reportedly said, stressing that he is negotiating with Agriculture Minister Yair Shamir and the Justice Ministry to transfer animal welfare law enforcement to the Environmental Protection Ministry. Until now, the the Agriculture Ministry has been in charge of enforcing the law but has repeatedly failed to properly do so.

Both NGOs also filed a criminal complaint with police against Soglowek.

He called Soglowek’s behavior “extremely serious” and said that the Council of the Chief Rabbinate would discuss it at their next meeting, which takes place on Monday.

“It is unbelievable that we should see such terrible scenes in the food industry in Israel. Anyone who witnesses abuse of animals is obligated according to Jewish law to warn those committing the abuse and report it to the authorities.

“The Torah commands us to show compassion to all creatures, reduce their suffering as much as possible including those which will be slaughtered,” Lau said in a prepared statement to the press. Lau stressed that by law, the chief rabbinate is only empowered to deal with kashrut issues. But he reportedly added that the evidence in Kolbotek’s report showed that the abuse at Soglowek could injure chickens in a way that would render them non-kosher.

In a prepared statement, the Agriculture Ministry insisted that it inspects slaughterhouses throughout the year. It said that the ministry’s inspectors conducted a number of computerized examinations at Soglowek during the past year.

During the ministry’s last inspection of Soglowek, which reportedly took place several days ago, there were no signs of physical injury to birds or violations of Animal Welfare Law, the ministry said.

However, the inspection did find that a number of birds could not be easily released from their cages, and that workers had to do so manually rather than rely on the dumping method that the ministry’s inspectors did not find particularly troubling other than the loud noise that the machine makes. The inspection also reportedly showed that some of those cages were broken and unfit for use.

The Agriculture Ministry allegedly ordered Soglowek to make the necessary repairs and improve the treatment of the birds during the waiting and unloading process, the ministry’s statement claims. It also claims that Soglowek promised the ministry that it would immediately stop using the machine responsible for dumping the birds, and that Soglowek also promised to shorten the transport and waiting times of birds prior to slaughter.

The Agriculture Ministry also claims that since the latest animal welfare laws took force, it has filed six indictments against alleged violators directly related to poultry welfare and transportation of poultry.

The ministry also said it has asked Kolbotek for the complete unedited video footage to aid in its investigation of Soglowek.

But the ministry’s track record is considered to be so poor that it is unlikely Kolbotek or animal welfare groups will cooperate with it.

Soglowek publicly apologized for the findings in Kolbotek’s report and claimed they do not “reflect the spirit of Soglowek.”

“We see this as a very serious case, and therefore right when we became aware of the case we immediately replaced the facility in the slaughterhouse. Although the facility adhered to regulations and standards in Israel and in the world, we decided to immediately stop the work and replace it in a process that has the most stringent standards. We will take every possible measure in order to ensure that such a case will not arise again.

“We emphasize that the event is not related to the quality of products. The products are as good quality and as safe as ever,” Soglowek’s CEO, Pini Kamari, reportedly wrote on the company’s Facebook page, despite the clear evidence to the contrary.

Animal Abuse At Soglowek Kosher Slaughterhouse Could Have Made Chickens And Turkeys Treife, Chief Rabbi Says