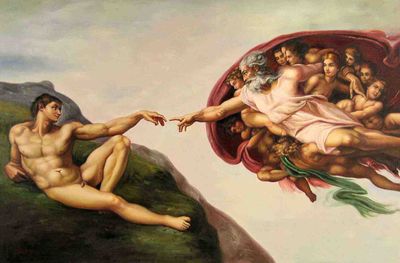 It has been suggested in the scientific and popular literature that Jewishness is a genetic trait found in our genes and that worldwide Jews comprise a genetically distinct group with some Jewish communities being described as “population isolates” (e.g., Atzmon et al. 2010; Behar et al. 2010; Ostrer 2012). For example, Atzmon et al. (2010) wrote that: "European/Syrian and Middle Eastern Jews represent a series of geographical isolates or clusters woven together by shared IBD genetic threads." Behar et al. (2010) wrote: "The most parsimonious explanation for these observations is a common genetic origin, which is consistent with an historical formulation of the Jewish people as descending from ancient Hebrew and Israelite residents of the Levant." The cover of the book "Legacy" says: "Ostrer shows that Jews from different Diaspora groups are linked by the genetic threads that provide a biological basis for Jewishness." However, none of these blury descriptions of "genetic threads" are substantiated by any particular genetic nucleotides, haplotypes, or genetic regions and even after decades of genetic research, these ideas remain controversial among geneticists as well as historians and social scientists (e.g., Sand 2009; Elhaik 2013; Venton 2013) with some proposing that these notions are driven by non-scientific ideologies (e.g., Kirsh 2003). It has been further suggested that traits such as intelligence are more strongly associated with Jews than with non-Jews (Ostrer 2012). Based on these notions, genetic testing companies now offer genetic tests that promise to accurately determine one’s Jewishness. Recently, A.B. Yehoshua an Israeli writer and scholar proposed that "A Jew is a Jew because he chose to be a Jew and not because he was forced - because of biology or by some external social force, to define himself as a Jew" dismisssing any genetic notion of Jewishness. We therefore propose to put to test the claims that Jewishness is the genes.

We propose to hold the “Jewish Genome Challenge.” In this challenge, we will obtain samples annotated as "Jews" and "non-Jews", genotyped on the Illumine HumanHap650K beadchip retaining only the autosomal data. Markers in linkage disequilibrium would be removed leaving out some 250,000 SNPs. This array and the pruned dataset were previously used to allege that Jews share common origin and thus fit for the test (Atzmon et al. 2010; Behar et al. 2010). If you feel that a particular nucleotide, haplotype, or genetic region necessary for your analyses may be missing, please let us know and we will reserve them. We will create “artificial offspring” from these samples by hybridizing them across random hot-spots and over several generations, determining the gender of that offspring at random, as in real life. In practicality, we will simulate a modern-day Israeli population. The Jewishness of the samples would be set in two ways: according to the Israeli law-of-return—stating that a Jew is anyone with at least one Jewish grandparent—and according to the Orthodox religious law (Halakha)—stating that a Jew is anyone who is born to a Jewish mother. The Jewishness of the samples would be known to us, but not to you. The final files would be made available in PLINK format and include the genetic sequence, sample identifiers and gender. We will then ask you to identify which of these samples are Jews or non-Jews based on the genetic data and test the accuracy of your predictions against their Jewishness according to either law.

Please inform us at (eelhaik at jhsph dot edu) by November 1st 2013 if you are interested in participating, and we will send you a link to the dataset. You have one month to provide your predictions. You may choose to make your predictions according to either or both laws. On December 1st 2013, we will end the challenge by publishing the real results along with the dataset, algorithms, and the detailed "family trees" to allow you to evaluate your results and improve your algorithms for future analyses. Two days later (December 3rd 2013), we will publish the names of the winners whose predictions exceeded the 50% (expected by chance), the accuracy of their predictions, and a brief statement from them.

The names of the losers will not be published. We cannot offer monetary awards, however, we feel that the glory of winning is a reward in itself as failure would imply that reports in the scientific literature regarding "genetic threads" within worldwide Jewish communities or between them and the biblical Hebrews should be dismissed. Moreover, failing the challenge would imply that the necessity for megalomaniac projects like the Jewish HapMap Project should be reevaluated as well as the rational for tests to prove Jewish bloodline.

The results of this challenge would be summarized in a paper in Frontiers in GENETICS under the topic Population genetics of worldwide Jewish people (November 1st is the last deadline for Abstracts submissions). Please do not hesitate to email us with any questions.…

I asked Elhaik to put all this into simple English. He did:

Some people say Jewishness is a religion. People can join or depart from it, like in any other religion.

Others say that Jewishness is in the genes, i.e., looking at one's genome can tell you if this person is a Jew. This camp consists of scientists who also claim that all Jews in the world share that genetic part as opposed to non-Jews [who do not]. Moreover, the State of Israel now uses tests for Jewishness based on such studies. To make it more clear, according to this camp, one can envision a biological weapon targeted to wipe out only Jews.

To put this question to test, I propose to see whether the genetic Jewishness camp can prove their claims. I will simulate Jews' and non-Jews' offspring by taking genetic data of Jews and non-Jews and creating offspring that would have Jew-Jew and nonJew-nonJew and Jew-nonJew parents. If Jewishness is in the genes, scientists should be able to correctly detect which of the offspring is Jews and which are not by following the Jewish gene. If they are wrong then Jewishness is a religion not a genetic condition, then their papers should be retracted. Consequently, it would prove that no test can be used to detect Jews, suggesting that the test employed by the state of Israel is for Ashkenazi Jews only (this is the reference population used in these cases) [should be stopped].

Major proponents of the “Jewishness in the gene” were personally invited this morning and so was Israel's Ministry of Foreign Affairs.