"We Jews are a people who themselves once faced the horrors of genocide and survived. We never again wish to open our newspapers and see images of mass graves filled with suffocated young children." 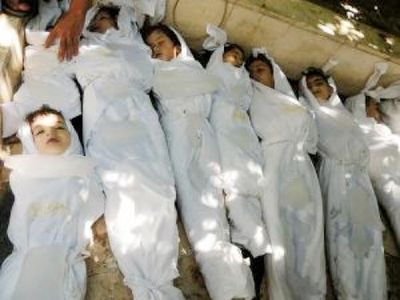 A small number of U.S. rabbis and Jewish leaders from across the Jewish religious and political spectrum – none of them holding senior leadership positions in their movement – wrote a letter urging Congress to support plans to strike Syria in response to its use of chemical weapons on civilians.

The letter was posted as a petition on Change.org:

We Jews are a people who themselves once faced the horrors of genocide and survived. We never again wish to open our newspapers and see images of mass graves filled with suffocated young children.

To: The U.S. House of Representatives

We write you as descendants of Holocaust survivors and refugees, whose ancestors were gassed to death in concentration camps. We write you as a people who have faced persecution for many centuries, and are glad to have found a safe refuge where we can thrive in the United States. We write as a people proud of our religious and historical tradition of helping the needy and defending the weak.

The recent chemical weapons attacks on the Damascus suburbs constitute a serious crime against humanity. These attacks killed upwards of 1400 people, the majority of them innocent women and children. As a people who themselves once faced the horrors of genocide and survived, we had hoped that we would never again open our newspapers to images of mass graves filled with suffocated young children. Now that we have seen such images coming from Syria, we call upon you to act.

Intelligence assessments from the U.S., U.K. France, Israel, Turkey, the Arab League, and many other allies all show conclusively that the Assad regime was responsible for the horrific chemical attacks of August 21st. We fear that if this attack passes without a decisive response, we might open our newspapers to more images of mass graves from Syria – and elsewhere -- in the near future. We have learned from our own history that inaction and silence are the greatest enablers of human atrocity.

For this reason, we call upon you with great urgency to authorize the President to use force in Syria "in connection with the use of chemical weapons or other weapons of mass destruction," as outlined in his August 31st draft legislation. Through this act, Congress has the capacity to save thousands of lives.

These are the Days of Awe for the Jewish people. In one of the climactic moments of our High Holiday prayers, we read "On Rosh Hashanah it is written, and on Yom Kippur it is sealed, who will pass and who will be created, who will live and who will die, who in his time and who before his time." May this coming year be one of life and creation the world over, in which we cease to witness the deaths of so many innocent human beings.


Institutions are for affiliation purposes only.

"We Jews are a people who themselves once faced the horrors of genocide and survived. We never again wish to open our newspapers and see images of mass graves filled with suffocated young children."