The Hidden History Of Zionist Orthodoxy

"Perhaps Religious Zionists can learn new lessons from the movement’s founders. While Rabbi [Avraham Yitzchak HaKohen] Kook and his son Zvi Yehuda loom large in the messianic component of the movement, the future of the Zionist Orthodox] [Ha]Bayit {Ha]Yehudi [Party] might possibly reside in the [largely forgotton] rabbis who preceded Rav Kook." 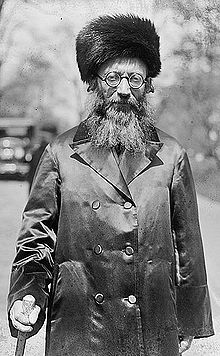 …Perhaps Religious Zionists can learn new lessons from the movement’s founders. While [the first Ashkenazi chief rabbi of Palestine] Rabbi [Avraham Yitzchak HaKohen] Kook and his son Zvi Yehuda loom large in the messianic component of the movement, the future of the Zionist Orthodox] [Ha]Bayit {Ha]Yehudi [Party] might possibly reside in the rabbis who preceded Rav Kook.

The elder Kook was a latecomer to Religious Zionism.

Rabbi Shmuel Mohilever and Rabbi Isaac Reines, renegades from prevailing anti-Zionist Orthodoxy, were two of the earlier unsung heroes of Zionism. Both rabbis played an important role in the development of Zionism in Eastern Europe before Theodor Herzl and political Zionism came to dominate the movement.

A century ago, many Jewish traditionalists censured the Zionist movement as a rejection of Orthodox Judaism and as a revolt against the Torah. The forerunners of groups like the Neturei Karta and Hassidic sects such as the Satmar condemned Jews, especially religious ones, who embraced Zionism. Mohilever and Reines were courageous: they understood that the Zionist movement, although in the main secular, had an important goals in terms of aiding a Jewish people in distress.

These renegade rabbis defended their embrace of Zionism.

They argued that their opponents who demonized them for building up settlements in Israel – before the coming of a Messiah chosen by God – were mistaken. An ailing Mohilever could not attend the First Zionist Congress in 1897. He did, however, write a letter to Herzl and to those in attendance. His words burned with prophetic urgency.

“A great fire, a fearful conflagration, is raging in our midst,” the Russian rabbi wrote long before the Holocaust, “and we are all threatened.” If the Zionists offered a haven to save the Jews of Eastern Europe from pogroms and poverty, were “there such among us who would spurn them?” For Rabbi Mohilever, the rise of the Zionist movement was not a harbinger of messianic redemption. He supported the settling of Israel as a fulfillment of Jewish law and Jewish aspirations. Mohilever defended Herzl’s political Zionism as a vehicle to provide a refuge that would save the Jewish people, save Judaism and save the Torah.…

What Kavon does not know is that Mohilever's letter is essentially quoting the man who convinced him to support the nascent Zionist movement – one of my great-grandfathers, Rabbi Chaim Yehuda Leib Litvin.

Known as the Sosnitzer Illui (and later as the Smargoner Gaon), Litvin was Europe's expert on gitten (Jewish divorces) and one of the top two or three rabbis in Europe in latter third of the 19th century.

Litvin was the rabbi of Brody when the notorious wave of pogroms that sparked the mass exodus of Jews to the US (and Canada, Argentina and Australia) began in 1881. Brody was the city many of these refugees first fled to before making their way to Hamburg or another port city and from there to America. He heard the stories of devastation and oppression first hand and they convinced him that it was necessary to support political Zionism.

Like Mohilever, he was asked to speak at the first Zionist Congress but had to decline due to illness – an illness that would eventually take his life.

Litvin – who as a teenager had been a senior secretary/assistant to the third Chabad-Lubavitch rebbe, Menachem Mendel Schneersohn (the first), known as the Tzemach Tzedek. He was also a posek (decisor of Jewish law) consulted by the Tzemach Tzedek. (Several of the Tzemach Tzedek's responsa, which were burned in a fire, were restored from Litvin's work Sha'arei Dayah. You can see this in the edition of those responsa published by Chabad's publishing arm Kehot.)

Litvin broke with Chabad after a particularly nasty incident in which Litvin – who had an encyclopedic memory of everything he had ever learned – saw that the Tzemach Tzedek had cited the wrong posuk (verse) of Tanakh in a ruling he had just written and which Litvin was copying for the files and to post for followers to see. So Litvin corrected the error and posted the ruling on the public notice board as was customary.

As he was doing so, the Tzemach Tzedek walked by with dozens of hasidim in tow, saw responsa with the correct verse cited, turned to Litvin and said, "Nu, Chaim, you couldn't wait until I was dead to do this?"

He was forced to flee Lubavitch late that night with his wife due to threats of violence from hasidim.

The Tzemach Tzedek died soon after.

Lubavitch went on to become the seat of the youngest (and, by some contemporaneous accounts, the least worthy) of the Tzemach Tzedek's sons, Shmuel, who amassed great wealth, in part by exacting payments from hasidim of his brothers who came to Lubavitch to pray at the grave of the Tzemach Tzedek.

Shmuel became extremely fat. (Far fatter than I've ever been, for those who are tracking this.) He drove around town in a gold-plated carriage, had clothes embroidered with gold, and lived extremely extravagantly.

His son Rabbi Sholom DovBer succeeded him, taking control of what was by then a very small, poor group of hasidim.

Rabbi Sholom DovBer,  a morose person who sought help from Sigmund Freud (and who was allegedly a victim of child sex abuse), went on to be the leading anti-Zionist in Europe.

The other Chabad branches descended from the other sons of the Tzemach Tzedek (Kapust, Orsha, etc.) were generally not anti-Zionist.

Rabbi Sholom DovBer was succeeded by his son Rabbi Yosef Yitzchok, who carried on his father's anti-Zionism and even added to it.

Chabad-Lubavitch did not temper its anti-Zionism until the State of Israel was declared in 1948.

But the root of much of the Orthodox support for Zionism before Rabbi Avraham Yitzchok Kook was from Chaim Yehuda Leib Litvin – who also taught Kook's brother, who went on to become the Chief Rabbi of Haifa and, briefly, Kook himself.

Litvin isn't well-known today (except among the top level of Orthodox and haredi rabbis who deal with Jewish divorce) because he was too ill to participate in Zionist politics and because haredi anti-Zionism wrote him out of the haredi canon.

Litvin's dealings with Mohilever are reported in the Smargon Yizkor Book and in the new edition of Litvin's Sha'arei Dayah.

The Hidden History Of Zionist Orthodoxy

"Perhaps Religious Zionists can learn new lessons from the movement’s founders. While Rabbi [Avraham Yitzchak HaKohen] Kook and his son Zvi Yehuda loom large in the messianic component of the movement, the future of the Zionist Orthodox] [Ha]Bayit {Ha]Yehudi [Party] might possibly reside in the [largely forgotton] rabbis who preceded Rav Kook."