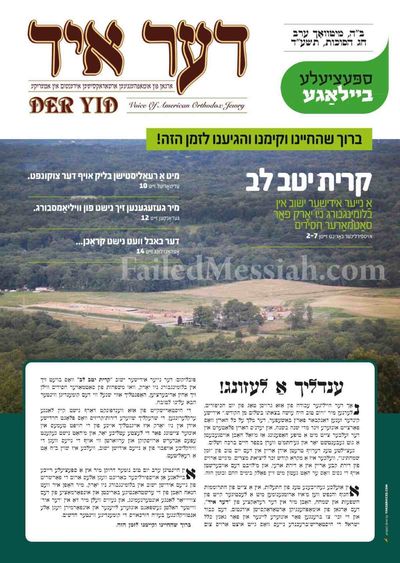 The front page of a 16-page Yiddish insert in yesterday's Der Yid, a Satmar-owned Yiddish-only newspaper, advertising a new Satmar hasidic village in Bloomingburg, New York with large townhomes selling for as low as $250,000

The Pine Bush School District, which includes the town of Bloomingburg, says that a private girls school to be built in the small town would mean higher taxes for thousands of residents.

A developer, Shalom Lamm, wants to build the 16-room school in an 18,000 square foot building to be constructed by him in the Bloomingburg’s downtown.

Lamm, who owns the Wurtsboro Airport, is also developing a 396-townhouse development in Bloomingburg – a development that was reveled only yesterday to be a new Satmar-only village.

The Times Herald-Record reported last month that Lamm has refused to comment on who the townhomes would be marketed to or what the nature and affiliation of the girls school would be, except that it would be private.

"Would we even be having this discussion if the application said 'The St. Ignatius Loyola School’?,” Lamm reportedly said.

An analysis of the fiscal impact of the school and Lamm’s development prepared for Lamm reportedly says the private school would be used for “the new Chestnut Ridge community" Lamm is developing. It claims that Lamm's development would mean additional annual school taxes for the district of $2.2 million. After related costs, the project would "easily yield a net contribution [to the school district] of well above $600,000 annually" to the district, Lamm’s analysis reportedly claims.

The experience at Kiryas Joel, the first Satmar hasidic village which is located in Orange County, New York, would tend to prove Lamm wrong – very wrong. Many properties there are listed as tax exempt, the number of students requiring special education – which must be paid for by the school district – is extremely high, and Kiryas Joel is the poorest municipality in the entire United States with an extremely high number of its Satmar-only residents receiving various government welfare and aid dollars.

Bloomingburg has a population of 420. Although some are Jews, none appear to be hasidim.

Yesterday, after months of secrecy the Satmar-hasid-owned Brooklyn-based Der Yid newspaper announced that a new Satmar-only village would be launched in Bloomingburg. Large townhomes were offered for sale in Yiddish-only ads (one is posted above) – an apparent violation of fair housing laws – for as low as $250,000 each.

"If a girls' school is built, a boys' is sure to follow," a local resident, says Nikki Latreille, told the Times Herald-Record, adding that she was afraid that Lamm’s development would mean that the Pine Bush district could one day be run by people "without the best interest of all the children.…And it's not a matter of anti-Semitism," she reportedly said, noting that her own son's bar mitzvah took place at Chabad-Lubavitch of Goshen.