Kapparot Operators In LA Reportedly Commit Fraud, Tons Of Slaughtered And Dead Chickens Thrown In Garbage, Not Given To The Poor

Many roosters – male chickens – used by men and boys for kapparot were really spent laying hens – i.e., female chickens. Tons of dead and rotting chickens tossed in the garbage. 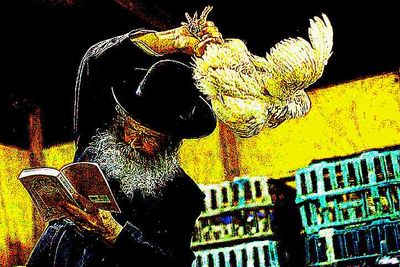 Writing in the LA Jewish Journal, Pini Herman details what a complete fraud kapparot operations in LA were this year and last year (and almost certainly in previous years, as well). According to Herman:

1. The “vast majority” of chickens used for kapparot and marketed as going for Tzedakah for the poor after slaughter are actually thrown in the garbage.

2. In response to Faith Action for Animals picketing of kapparot siteson Pico Boulevard, which began on September 8, six days before Yom Kippur, the LAPD stopped the LA Department of Sanitation from removing the most of the discarded slaughtered chickens rotting in large plastic bags.

3. Because of that, bags of rotting dead chickens kept piling up at the kapparot sites.

4. This caused the kapparot operators to panic as Yom Kippur rapidly approached. Those operators began using private cars and pickup trucks to haul away the rotting chickens.

5. On Friday morning, Erev Yom Kippur, one of those pickup trucks piled high with bags of rotting chickens was observed by Rabbi Jonathan Klein driving recklessly and at high speed through the Pico-Robertson neighborhood.

6. Journalists from Jewish and non-Jewish publications played what a cat and mouse game with unscrupulous kapparot operators who attempted – usually unsuccessfully – to cover up evidence of the rotting chickens and their clandestine disposal.

7. At least 10 tons of dead chickens were hauled from La Brea-Melrose and Pico-Robertson neighborhoods last year by the LA Department of Sanitation. Herman estimates the number of dead chickens tossed in the garbage to have been 5,000.

8. The chickens Herman saw being delivered to one Sefardi kapparot operation appeared to be all spent laying hens – i.e., females. Halakha requires that men and boys use roosters – male chickens – for kaparot and women and girls use hens – females. Herman wrote that he has personally seen kapparot operators telling men that hens were roosters. “About half of those engaged in Kaparot are men, and they are often defrauded into thinking they are swinging roosters,” Herman wrote. “Talking to a kippah wearing man loading an F-150 Ford pickup truck with hens that Thursday morning, I asked him if there were roosters there and he said that there were. I asked him if he could point them out to me and he pointed to a stack of cages. When I went over to inspect them closely and began photographing evidence of eggs in the cages, he quickly gathered a pile of eggs near the cage and went behind a truck in the alley, apparently to dispose of the eggs, and I was aiming the camera to capture this and the man came at me and ripped my camera from my hand and tossed it on the ground.  When I picked up my camera, he pushed me to the ground, trying to grab the camera.  I called the LAPD and ultimately filed a battery and vandalism report with two very weary police who had been assigned to monitor the situation and the more senior one related that he had been going out on Kaparot disturbance calls for several years.”

9. On Friday, the California Department of Food and Agriculture issued notices of violation, calling the kapparot operations unlicensed slaughterhouses.

10. The gross mistreatment of the chickens, the bait-and-switch nature of the kapparot operations, and the near-complete disregard for the law exhibited bt kapparot operators has received extensive coverage in the Jewish Journal and also on KCBS-TV News and in the LA Times.

Kapparot Operators In LA Reportedly Commit Fraud, Tons Of Slaughtered And Dead Chickens Thrown In Garbage, Not Given To The Poor

Many roosters – male chickens – used by men and boys for kapparot were really spent laying hens – i.e., female chickens. Tons of dead and rotting chickens tossed in the garbage.