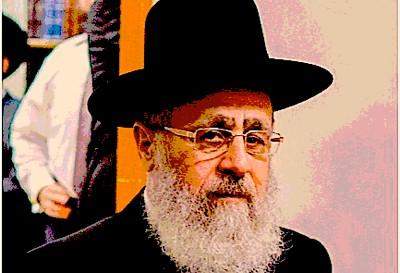 The Bnei Brak rally was reportedly divided into two parts. The first part featured rabbis who gave speeches calling for support for Shas; the second part featured traditional dancing. According to Israel HaYom, participants insisted that the rally was entirely political and included the participation of Shas officials.

The rally’s guest of honor was supposed to be Shas chief Aryeh Deri, but he had to cancel after the spiritual leader of Shas, former Sefardi Chief Rabbi Ovadia Yosef, was rushed to the hospital suffering from a cardiac disorder and acute kidney failure.

But that did not stop Rabbi Ovadia Yosef’s son Rabbi Yitzhak Yosef, the new Sefardi Chief rabbi of Israel, from attending the Shas rally and delivering a speech there.

According to clause 42.322 of Israel’s Civil Service regulations, Yitzhak Yosef was forbidden to participate in the rally in any role because those regulations state that Yosef is "a state employee, who ranks as one of the four highest positions in the administrative leadership.…[Therefore the] prohibition of participation in the public gatherings of political parties or of any political body as a lecturer on any topic, due to the fact that the appearance of the employee on a party stage may create the impression of party affiliation” applies to him, according to Israel HaYom.

Shas denied the rally was political in nature or that it sponsored the rally.

"This was an event for the municipality of Bnei Brak and was funded by the municipality. There was no mention of Shas at the event or in the publicizing of the event,” Shas reportedly claimed.

However, pictures from the event show a huge banner with the Shas slogan, "Et achai anochi mevakesh" [“I seek my brethren”] and a picture of Rabbi Ovadia Yosef, the spiritual leader of Shas. An eyewitness told the paper that during the event, organizers suddenly put a white piece of paper over Shas’s name on the banner, blocking it out – aparently after realizing reporters might be present.

"The municipality did not take part in funding the event, but rather assisted with the spreading and hanging [of notices about the event],” a city spokesman reportedly said.

Even more incriminating was the behavior of Shas before the rally, when it sent out a notice promoting the rally which reportedly read, "This evening, a Shas conference in honor of the beginning of the elections will take place. Rabbis, members of the Council of Torah Sages and the city's Shas representatives will take part."

Shas has a long history of lying and of criminal behavior. Its current chairman, Aryeh Deri, was convicted of violating the public trust and accepting bribes and other Shas leaders have allegedly been involved in similar illegal schemes.