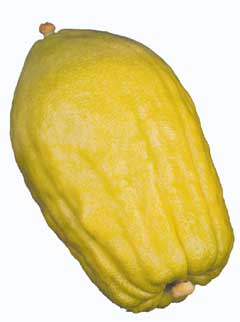 The etrog smuggling business is reportedly going strong this year in Israel as it has in previous years.

The pricey fruit – which can sell for as much as several hundred of dollars each – are used in a ritual conducted on the Jewish holiday of Sukkot, which begins this week

Here a few of the arrests made by Israeli customs agents over the past few days as reported by Yeshiva World:

…one smuggler is a school principal in Betar Illit who went through the Green Line with 125 esrogim in his suitcase. He had an unspecified number of esrogim in his carryon bag. When he was questioned the agents learned he arrived with another passenger who already passed through and was in the arrivals terminal. The agents searched for the passenger and located him.

The second passenger explained he traveled to Jerba for the esrogim for these are the only ones that he and his community will use. He only had a carryon and it contained esrogim.

A third passenger, arriving from France, was apprehended traveling with 150 mehudar esrogim which agents report were “well wrapped in his suitcase”. He explained that he simply wished to distribute them for people free of charge to permit them to fulfill the mitzvah.

Another passenger, an Israeli citizen, was apprehended with 125 mehudar esrogim in his suitcase.

Import tax on esrogim is 2.72 NIS per kilogram but the fee cannot exceed 144%. In addition, one must pay 18% value added tax.