A vacant lot in the predominantly secular Jerusalem neighborhood of Kiryat Yovel that measures approximately 1.7 acres has become the new epicenter in an unholy war between the city’s rapidly growing haredi population and almost everyone else. 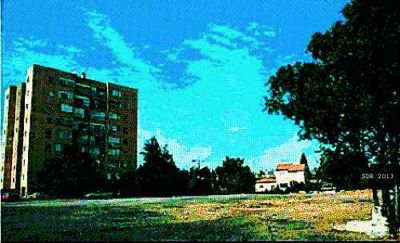 The Empty Lot That Has Become The New Epicenter Of What Many Call A Haredi War On Jerusalem And Modernity
Shmarya Rosenberg • FailedMessiah.com

The Warburg Lot, a vacant lot in the predominantly secular Jerusalem neighborhood of Kiryat Yovel that measures approximately 1.7 acres, has reportedly become the new epicenter in an unholy war between the city’s rapidly growing haredi population and almost everyone else.

Haredim want to build a haredi-only kindergarten there – even if they have to do so unethically or, allegedly, illegally.

Almost everyone else, including politicians from the usually warring Labor and Meretz political parties, has joined together to insist that a pluralistic cultural center or school be built on the empty lot as the city originally promised.

But Jerusalem’s rapidly growing, poorly educated and grindingly poor haredi community, forced to expand out of their insular neighborhoods by the sheer growth of their population – haredim generally marry young, sometimes illegally young, and eschew birth control – found relatively affordable housing in this neighborhood of immigrants, and moved to take it over, using their bloc votes and political back-room dealings to get unethically what they could not get democratically.

Five years ago, a center for the dramatic arts and music set in the middle of a lush park were scheduled to be built on the Warburg Lot.

But in the darkness of a Jerusalem night those plans changed without so much as a public announcement.

“Five years ago, we woke up one morning and we saw bulldozers [brought in to clear the area] and were told they were going to build a kindergarten for a haredi organization, which meant that no secular Jews could use it for their kids. So, we decided not to let that happen,” Dina Azriel, an architect and neighborhood activist, told the Jerusalem Post, emphasizing that the plans for the cultural center/school project were illegally shelved by the then haredi-controlled city government. Azriel, who lives adjacent to the Warburg Lot, said that the neighborhood’s non-haredi coalition has been forced to block the entrances to the lot to stop haredi construction. The group also holds regular cultural events on the lot, both to mark their ground and to keep the lot open for public use.

“We are dedicated to one principal cause: maintaining an inclusive society in Kiryat Yovel,” Azriel reportedly said. “We want to make sure everyone can [make] a home in our neighborhood – regardless of their ways of life and beliefs.”

Wednesday night, non-haredi neighborhood residents and Jerusalem politicians held a barbecue on the lot. Estee Kirmayer, who heads the Jerusalem district of the Labor Party, organized it.

“This place is the symbol of the secular Jerusalemite – people who came and said ‘we love our city and we’ll stick with this place.’ This community was built on this struggle – of secular identity. We have an agenda. We want a secular yeshiva here because we have Jerusalem’s values and our own way to view and practice Judaism. This is what Jerusalem needs and what the State of Israel needs, and that is why this place is so important,” she told the Post.

A former president of the Masorti (i.e., Conservative) Movement in Israel participated because he wants to stop what he calls the “haredization” of Jerusalem.

“Tonight I’m wearing my political kippa because Meretz and Labor together are creating a bloc that will stop the haredization of the city. I think this is the most important political development in the city,” Rabbi Ehud Bandal reportedly said, noting that Jerusalem’s two major mayoral candidates, secular incumbent Nir Barkat and the kippa-wearing Moshe Lion, are “competing over who will give more to the haredim” in order to win the haredi bloc vote. “It’s very important for the City Council to have a major bloc that will stand against this process of the haredim taking more control of funds and land – to make sure this site remains aligned with the nature of this neighborhood.

“We are not against the haredim,” Bandal emphasized. “They are part of this city and deserve their rights, but we hope to make sure the open and pluralistic nature of this neighborhood remains the same. We are here to support an open and free Jerusalem and making sure that we stand up for the rights of the secular community, which is afraid of losing their status and ability to practice their way of life and values.”

In formerly secular or Modern Orthodox neighborhood after neighborhood, haredim have moved in and demanded their extreme version of Judaism and modesty become the neighborhood's norm.

For example, haredim repeatedly rioted over the existence of the Edison movie theater – in its same location for decades in what had traditionally been a secular neighborhood on the edge of Jerusalem's business district – until it was finally forced to close due the violence.

Haredim have intimidated, harassed, threatened and sometimes physically beaten shop owners to force them to close or to coerce them to stop renting even G-Rated DVDs or from selling iPods. Shops have been repeatedly vandalized, as have been public buses and bus shelters deemed by haredim to be immodest because men and women can sit together and because women –  any women, even modestly clothed women, toddlers and female cartoon characters – appear on advertisements there.

Haredim have also repeatedly harassed, threatened and assaulted ‘immodestly’ dressed women or women who refuse to gender-segregate public spaces like public buses and sidewalks, even though forced or coerced gender segregation is illegal in Israel.

Because the rapidly growing haredi bloc vote is so corrosive, non-haredim rarely win these battles, even when they outnumber haredi voters.

It’s like playing a game where restrictive rules apply only to you while your opponent is free to do as he pleases. There is plenty of crime and corruption but almost no punishment.

As Paris is known as the City of Light, Jerusalem is rapidly becoming known as a city of darkness – an imposed darkness of regressive fundamentalism; of grinding, self-induced poverty and its concomitant corruption; a city self-destructing bit-by-bit, haredi-only kindergarten by haredi-only kindergarten, back-room deal and bloc vote by back-room deal and bloc vote, before the weary eyes of those who rebuilt her.

A vacant lot in the predominantly secular Jerusalem neighborhood of Kiryat Yovel that measures approximately 1.7 acres has become the new epicenter in an unholy war between the city’s rapidly growing haredi population and almost everyone else.