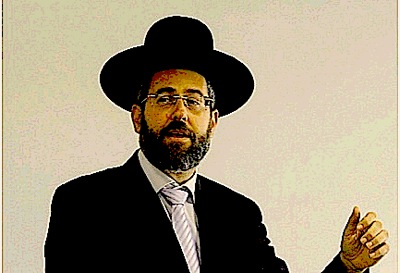 Lau is the son of former haredi Ashkenazi Chief Rabbi Yisrael Meir Lau, who was in office when his son allegedly cheated.

A close supporter of Lau reportedly responded to the report of the alleged cheating by calling the charge a “blood libel.” Lau’s attorney Ram Caspi reportedly called it "a perverse attempt to harm and attack the rabbi using an invalid offensive argument. The rabbi has never been disqualified from any test in the past at the Chief Rabbinate…[the] "claim has no basis or documentation."

Arutz Sheva reported that it received the information just before the Chief Rabbinate elections. However, the right wing Zionist Orthodox news website decided not to run the story “so as not to harm the rabbi or the elections.” It justified its decision by claiming that it is not clear whether the charge is factual or whether it was only meant as a campaign dirty trick.

But now the campaign is over and Channel 2 has reported it.

The chief rabbinate has been under fire for many things since haredim took control of it over a decade ago.

One of those things it has been excoriated for is the nepotism it is riven with and the practice of the haredi chief rabbis to exempt friends and family from taking the formal – and exceedingly difficult – written smicha tests everyone else must take in order to be ordained.

Instead, the haredi chief rabbis opted to allow their relatives and friends to take brief oral “exams” that in no way approach the difficulty of the standard written test.

That practice was stopped after the Israeli media exposed it last year.

Ordination in Israel is equivalent to college or graduate degrees (depending on the level of ordination received), and holders of ordination are by law paid more money than those who do not have ordination or a college degree.

Lau was under fire last week for making a racially bigoted remark about Black basketball players that used Israel's version of the "N" word, "darkie" and "coon."

Yona Metzger, Lau's haredi predecessor, had his office and home raided by the elite police fraud squad last month while he was still sitting chief rabbi. Metzger was arrested on charges of fraud, money laundering and various related crimes.

Channel 2 quoted test supervisor Rabbi Uzi Levi's affidavit as saying that [in 1993] Lau "had prepared, ahead of time, notes on the subject he was being tested on and used them during the exam, which is strictly forbidden." In his affidavit, Levy further said he confiscated the notes and handed them over to then-chairman of the examination committee Rabbi Dov Lior, who later decided to disqualify Lau's test.

Lau was officially ordained in 1994, after taking the exam a second time.…