"In Israel, Judaism and democracy are both harmed by this unholy alliance. By accepting Orthodox rulings as law, the Israeli government has brought Israel –and the Jewish people—to this current crisis." 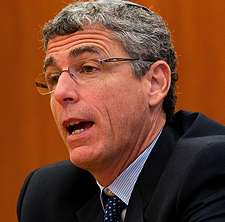 …Despite their decrease in numbers, reform Jews are still the largest and most prominent sect in North American Jewry. Their president, Rabbi Rick Jacobs, blames Israel's religious policy for what he terms a "crisis."

"The biggest problem today between Israel and American Jews regarding religion is that Orthodox Judaism is a powerful, coercive political force in Israel," Jacobs told Ynet several weeks after the election of Israel's new chief rabbis, both of orthodox leanings.

"In Israel, Judaism and democracy are both harmed by this unholy alliance. By accepting Orthodox rulings as law, the Israeli government has brought Israel –and the Jewish people—to this current crisis," he charged.…

"North American Jewry, especially younger Jews, simply don’t understand why the Judaism that they know and love is not recognized by the Israeli state," Jacobs said [separately at a] seminar for journalists jointly addressed by the top leaders of the Reform, Conservative and Modern Orthodox movements].

"This is especially true concerning the role of women. Women are completely equal in every aspect of how we practice our Judaism—it is essential that the same be available in Israel.

"Ultra-Orthodox Judaism is a legitimate choice for those who chose it; but it must no longer be the default position of the Jewish state.

"Too many Diaspora Jews are disconnecting from an Israel that does not honor, reflect or support their core Jewish commitments.

"Our Movement has been clear consistently about our love for the State of Israel. But we expect that we –and all Jews—have the same rights in the Jewish state that we have in every other country.

Usually sidelined as an esoteric debate in Israel, Jacobs explained that the Women of the Wall issue is a top priority on the reforms' agenda.

"How is it possible that a Jewish woman can actually be jailed in the Jewish state for praying the Sh’ma out loud while wearing a tallit? What kind of message does that send to women all over the world and to Jews worldwide? We expect that the situation will change in Israel so that all forms of Judaism can thrive and flourish," he said.…

"In Israel, Judaism and democracy are both harmed by this unholy alliance. By accepting Orthodox rulings as law, the Israeli government has brought Israel –and the Jewish people—to this current crisis."