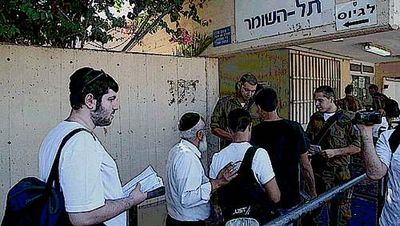 'Haredi' recruits reporting to the IDF's haredi induction center today. Note three are wearing t-shirts, at least one is wearing jeans, and none have peyos or beards – except an elderly man.

The biggest ever [IDF] recruitment of haredim is underway. About 400 young haredi and religious [i.e., Zionist Orthodox] men enlisted in the IDF Thursday morning, most in the Netzach Yehuda Battalion, the newly established haredi infantry battalion, and a few dozen in security roles at Air Force bases and combat support roles for other units. "I am proud to serve the country," said Reuven, a yeshiva graduate and one of the hundreds of haredi recruits who arrived at the induction center.

This is the biggest enlistment to haredi combat courses that the IDF has held thus far. Two hundred and fifty recruits will go into two companies, which will be part of the two haredi battalions, and will be sent to a special first-of-its-kind training base in the Jordan Valley, established solely for training haredi soldiers.

The base is located near the regimental training base of the Kfir Brigade. This is a base independent of other units, where entry to female soldiers is forbidden. At its prime, after the two additional companies have been recruited in the November cycle, it will house 640 ultra-Orthodox recruits.

The two battalions will continue to follow the program prescribed with the establishment of Netzach Yehuda in 1999: 30% will be religious [i.e. Zionist Orthodox] soldiers and 70% will be haredi soldiers. The Personnel Directorate’s definition of haredi is based on the last educational institution in which he studied [not on the soldier’s current affiliation]. Among the recruits who arrived at the induction center on Thursday morning was Yisrael Wolfson from Kfar Chabad. As he entered the center, he said, “To criminalize all haredi public as draft-dodgers is racism. During the time of the Torah, they went out to fight and to sacrifice their souls, and the haredi did this also during the establishment of the state.”…

What Ynet doesn't report and the IDF refuses to admit is that the "70%" who are haredim are really mostly former haredim and "shabbabnikim" (haredi 'bums') who were kicked out of yeshivas or left of their own free will and wander the streets, often in packs or in small gangs. Others are ba'al teshuvas.

Only a very small number are actual haredi yeshiva students, and there is no reason to think that the "400" "haredim" who enlisted are any different.

Update 6:08 pm CDT – The Jerusalem Post openly reports that many of these "haredi" recruits are not actually haredi yeshiva students – or even haredi:

…Although the IDF and several MKs declared that the 400 new recruits were haredi, doubts were raised as to the true societal identification of the new conscripts.

Recruits who were seen arriving at the induction center were noticeable for the diversity of their attire, which was not in keeping with the general haredi standard of black suits and white shirts.

MK Mordechai Yogev of Bayit Yehudi admitted that a large contingent of the recruits was not from the “haredi mainstream.”

“To tell the truth, not all recruits are from the haredi mainstream, especially those enlisting to the Nahal Haredi,” Yogev told The Jerusalem Post.

“The recruits to Shahar are more from the mainstream.

However, they are more mature recruits, around the age of 22, married, and have spent a considerable amount of years in yeshiva.”

Yogev said that according to his estimates, 50 percent of recruits to Netzah Yehuda were haredi, with others coming from “other ends of the scale.”

“Some are marginal youth; that’s correct. But the army is suitable for them as a framework, and we should encourage this,” the MK said, adding that he believed about 40% of the recruits to Nahal Haredi were from the “hardal” conservative national-religious sector [the very conservative Zionist Orthodox faction called Haredi-Zionist Orthodox, Haredi-Dati Leumi].

MK Omer Bar-Lev of Labor, the chairman of the Knesset Subcommittee for Human Resources in the Knesset Foreign Affairs and Defense Committee, insisted that haredi enlistment was on the rise and said that 2,000 haredi men were expected to enlist in 2013, up from 1,500 in 2012.

Bar-Lev also acknowledged that some of the recruits were not from the haredi mainstream, noting that that a proportion of them fell into the category known as “youth who have been left behind,” that is, who have not succeeded in the yeshiva environment.…

Labor's position is that there should be no penalties for haredim who dodge the draft, and Labor's leader, Shelly Yachimovich, was initially opposed to drafting haredim at all.

I believe this is why Bar Lev tried to minimize the number of non-haredim at today's recruitment.

MK Rabbi Dov Lipman, the supposed champion of moderate haredism, told the Post that he opposed any penalties for haredim who dodge the draft, but was compelled to agree to those penalties after being told that it would be illegal to penalize non-haredim but not penalize haredim:

Lipman…pointed out that he was, however, not in favor of the clauses providing for criminal sanctions against those refusing to enlist, but said that these provisions had been impossible to avoid based on advice from legal advisers from the Justice Ministry.

Lipman also disingenuously said that we should not judge who is and who is not a haredi by their dress – even though it was absolutely clear that the recruits wearing shorts and t-shirts and those wearing small knitted kippot were not haredi, and many recruits openly admitted that they were not haredi.

In other words, the government and the IDF are lying about and misrepresenting the actual number of haredi recruits because that  number is quite small.