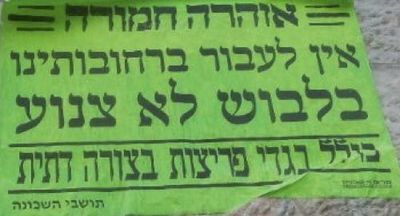 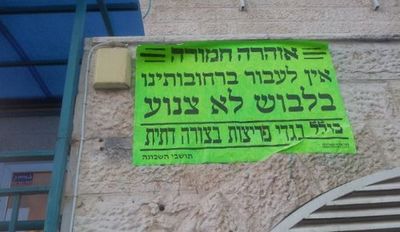 Some haredim in Beit Shemesh have taken a break from rioting to – illegally intimidate women.

Nili Phillip reportedly contacted the Meuhedet HMO through Facebook and asked them to remove the signs posted on their clinics.

“It is important for us to emphasize that there is no connection between the Meuhedet health maintenance organization and the signs you refer to. We are talking about a private initiative by citizens who posted the signs on the clinic walls,” Meuhedet reportedly replied, specifically not mentioning anything about taking the illegal signs down.

“I understand what you are saying," Phillip reportedly wrote back,"please remove the signs as quickly as possible and clarify who hung the signs and report them to the police, as this act represents sexual harassment of your patients.”

The illegal signs are still up.

Dr. Eve Finkelstein, who has worked for several HMOs in the city, told AKS that these signs have been up for more than a week. The clinics do not take down these signs, she reportedly said, “because they are scared. Behind these signs is not only the threat of violence but a threat that if they are taken down, [the HMOs] will lose their [haredi] patients.”

The High Court of Justice recently ruled signs like this are illegal and it specifically mandated HMOs to stop breaking the law to accommodate extreme haredi modesty wishes.

In haredi Beit Shemesh, that law means nothing.