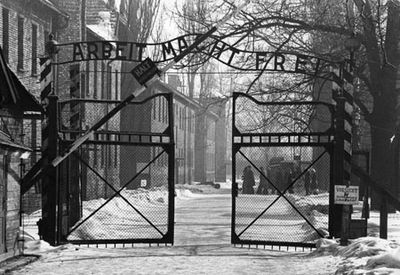 The entrance to Auschwitz. The sign in translation reads, "Work makes free."

The New York Jewish lobby has unfairly blackened the name of World War II pope Pius XII in the interests of a modern political agenda and needs to be challenged, former Australian deputy Prime Minister Tim Fischer has charged.

Pius has been criticised for not doing enough to protect Jews during the Holocaust, but Mr Fischer argues in a book launched in Melbourne on Friday that he did save Jews "and gets zero credit".

In fact, according to Mr Fischer, Pius instructed Catholics to help Jews, hiding hundreds in convents, monasteries and the Vatican. The Nazis rounded up 1002 of Rome's 8000 Jews in 1943 and sent them to Auschwitz, but the other 7000 were saved.

In the book, Holy See, Unholy Me: 1000 Days in Rome, Mr Fischer says an Israeli ambassador who called for a recognition of the live-saving work of Pius XII was quickly forced into a humiliating backdown.

"Further, the moment any suggestion is made to consider Pius XII for beatification and sainthood, they hit out at close to full power and use all media avenues to stamp it out."

Reports from the Vatican this week suggest Pope Francis wants to move ahead with canonising Pius.

Identifying Melbourne-educated Israeli spokesman Mark Regev as a key figure, Mr Fischer writes that the Jewish lobby's media skills far outweigh the Vatican's and suggests the tactics "are about representing a cause and maintaining influence and power.

"The American Jewish lobby is run by hardliners who get their daily feed from Jerusalem and Tel Aviv, and will cut no slack in terms of Israel's policies in the West Bank."

Mr Fischer says the biggest disaster for Rome's war-time Jewish community was the split between pro and anti-Fascist factions. "That broke down the unity when it was most needed, as the Nazis rolled into Rome. The Fascist Jews said nothing would happen."

The chief rabbi, Israel Zolli, an anti-Fascist, warned the community that it must get ready, for example hiding synagogue lists. After the war Rabbi Zolli converted to Catholicism, and "with that he got totally airbrushed out of history".

"The Rabbi of Rome and the Bishop of Rome both saved thousands of Jewish lives, and deserve fairer assessment," Mr Fischer said.

He said he expected a backlash against his comments, but hoped fair-minded people would read the book.

He conceded there was evidence of a Croatian Catholic pipeline through which Nazis escaped after the war, and said that if Pius knew about it he should be "pinged" for it.

Posted at 09:07 AM in Antisemitism, History | Permalink