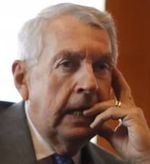 Last year, Charles J. Hynes told media that the prevalent harassment, shunning and extortion suffered by haredi child sex abuse victims by haredim and by haredi rabbis was "worse than the Mafia." Now Hynes has taken back that remark in his never-ending grovelling for haredi bloc votes.

Brooklyn D.A. Charles J. Hynes went to visit haredi rabbinic leaders again this week in search of their followers' bloc votes. In fact, some of the rabbis he visited – the Munkatcher Rebbe for example – are top supporters of Rabbi Boruch Lebovits, a well-known child sex abuser who Hynes is supposed to retry

In the process of asking for these rabbis' followers' bloc votes, Hynes privately and publicly walked back his most famous comment on these very same haredi rabbis' harassment of victims of child sex abuse. Hynes told media that the harassment, shunning and extortion suffered by haredi child sex abuse victims by haredim and by haredi rabbis was "worse than the Mafia."

Now, the ethically challenged, desperate and arguably corrupt D.A., who is on the edge of being – finally – voted out of office says that remark was "insensitive" and "a wrong thing to say."

Hynes did not criticize the shunning, harassment and extortion of child sex abuse victims and their families and supporters or do anything whatsoever to show sympathy for or empathy with those victims – the very victims he is sworn to protect.

District Attorney Hynes was warmly welcomed and greatly lauded for keeping Brooklyn safe and for fairly treating the community, in his years as District Attorney. According to sources who have spoken to YWN, Mr. Hynes walked away with blessings and an expression of support of his candidacy from every single Rov he visited.…

In all of his meetings in the community, Mr. Hynes was warmly greeted, with some of the rabbis expressing their great concern about who his opponent is affiliated and some of the negative comments his opponent has made about the Orthodox Jewish community. “At least with you, while we disagree on some issues, we always know that you have an open door and a willingness to listen to us,” one of the Rabbonim told Mr. Hynes.

As for the ‘mafia’ comment, while the issue was not raised during his meeting with the Satmar Rebbe, Mr. Hynes did, in fact, apologize publicly for his previous comment in which he called some in the Orthodox Jewish community – ‘Mafia’.

“That was not only a wrong thing to say, an unfortunate thing to say, it was an insensitive thing to say,” Mr. Hynes admitted in an interview with Hamodia. “Now, ordinarily, I’m pretty sensitive. And what I said was insensitive, and I’ve apologized. I had a group of my friends in Williamsburg recently and I apologized to them. And I apologize to your readership. I should not have said that.”

Last year, Charles J. Hynes told media that the prevalent harassment, shunning and extortion suffered by haredi child sex abuse victims by haredim and by haredi rabbis was "worse than the Mafia." Now Hynes has taken back that remark in his never-ending grovelling for haredi bloc votes.