A swastika and the slogan “Chardak [“bacteria” “cockroach”] get out!” were found painted on a park bench in Bnei Brak yesterday. 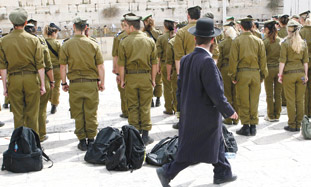 Once again chardakim [a derogatory term for haredi soldiers that is roughly equivalent to “bacteria” or “cockroaches”], chareidim serving in the IDF[,] were targeted with hate graffiti, this time in Bnei Brak. A swastika and “Chardak [“bacteria” “cockroach”] get out!” were painted on a park bench in a Bnei Brak park on Monday, 29 Menachem Av 5773 [yesterday].

Recent attacks have occurred in Yerushalayim [Jerusalem] and in a number of cases; soldiers were actually attacked in the Meah Shearim/Beit Yisrael areas.

IDF Chief of Personnel Branch Major-General Orna Barvibai recently sent a directive to officers to become more vigilant to the alarming trend of Orthodox soldiers being attacked by those who oppose military service. The senior officer called on officers to give chizuk [strength] to the chareidi soldiers who are undergoing a difficult period.

This, bad as it is, is much milder than the assaults and other violence against haredi soldiers common in Jerusalem.

A swastika and the slogan “Chardak [“bacteria” “cockroach”] get out!” were found painted on a park bench in Bnei Brak yesterday.