Israel’s Antiquities Authority says the writing on the shard spells out the name of the father of a 7th century BCE biblical  prophet. 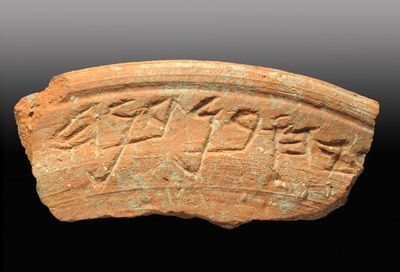 Israeli archaeologists have reportedly found a 2,700-year-old pottery shard in Jerusalem that dates from the end of the First Temple period and may contain the name of a biblical prophet's father.

The shard was found in the Arab village of Silwan which abuts modern day Jerusalem and the City of David and is thought to be the actual site of much of ancient Jerusalem, the Times of Israel reported.

Israel’s Antiquities Authority says the writing on the shard could spell out the name of Zechariah ben Benaiah, the father of the 7th century BCE prophet Yahaziel, mentioned in the Book of Chronicles as a prophet for King Yehoshapat.

The text fragment, transliterated from ancient Hebrew script, reads, “ryhu bn bnh,” which could spell [Zecha]riahu ben Benaiah, the father of the prophet Yahaziel, whose name appears in theh biblical book of 2 Chronicles 20:14 when Yahaziel prophesied to King Yehoshaphat.

“While not complete, the inscription presents us with the name of a seventh century BCE figure, which resembles other names known to us from both the Biblical and archaeological record… and provides us with a connection to the people living in Jerusalem at the end of the First Temple period,” a statement from the Israel Antiquities Authority reportedly said.

Israel’s Antiquities Authority says the writing on the shard spells out the name of the father of a 7th century BCE biblical  prophet.