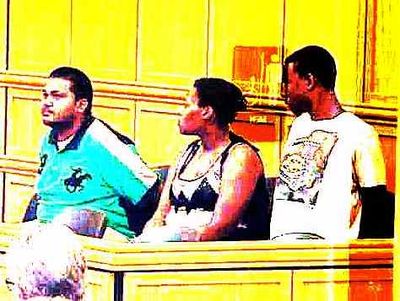 The three were headed to Monsey to “shoot Jews,” Ramapo Supervisor Christopher St. Lawrence said at a late-morning press conference at town hall after he reviewed statements given by the three to police.

"There’s no tolerance for anyone to attack anyone in our community,” St. Lawrence said. “This was a hate crime.”

The three suspects were arraigned in Ramapo Town Court and sent to the Rockland County jail after they said they could not post bail.

The incident occurred amid rising tensions in Ramapo between the large Orthodox and Hasidic Jewish population and the town’s equally large immigrant and black populations over public school funding and zoning issues.

1. St. Lawrence benefits politically from playing this up. That doesn't mean the incident did not occur as reported, and that doesn't mean that the three arrested are not antisemites. But it does mean that everything St. Lawrence – who has a very checkered background and who appears to be under federal investigation – says has to be taken with an extra grain of salt. That also applies to his political allies, police and even the DA.

But that does not mean this incident happened in a vacuum. Years of abuses by the haredi-controlled school board, other public corruption, rampant haredi housing, zoning and safety violations repeatedly left unpunished (or dramatically under-punished) by politicians and judges dependent on the haredi bloc vote, and the pervasive feeling in non-Jewish minority communities in Rockland County that Jews are not their partners or friends and that they are being 'screwed by the Jews' (they mean haredim but may not be able to distinguish between them and non-haredim) all play roles here.

However, the law cannot and should not allow these provocations to influence judgement of and punishment for the crimes committed.

That an antisemite grew to hate Jews because his haredi neighbor illegally converted the small single family home next to his into a rat-infested illegal boarding house, or because his kid's art, music and athletic programs were all cut exactly at the time the haredi-controlled school board was illegally funneling millions of dollars into haredi yeshivas' religious textbook funds, cannot be allowed to play a role in how the antisemite's crimes are prosecuted and punished.

In the same way, a racist's crimes and his racism cannot be justified or excused because a black teen mugged the racist's mother or stole his car, and the racist's racist crimes must be prosecuted and punished as if the provocation did not exist. That does not mean, however, that black street crime is not damaging to the perception of the black community by some outsiders.

Some haredim will argue that the haredi provocations like the school board's misconduct should be hushed up to prevent antisemitism.

But that attitude is, I think, incorrect.

That will have two major effects:

a) It will reduce haredi crime.

b) It will show outsiders who have not formed strong negative feelings toward Jews that not all haredim and not all Jews should be judged by the crimes committed by haredi criminals.

People who hate, those true believers, will almost always continue to hate no matter what the facts are; if facts do not exist to support their hate, they will invent them.

But those sick people are the very small minority.

What haredim and blacks and other minorities should want to do is reach the people those true believers try to sway, and one of the best ways to that is to be up front and honest about community problems and try to repair them.

Haredim often view the world as a them against us type of place, something very tribal, where Amalek (the biblical arch enemy of the Jews) lies in wait around every corner plotting to destroy them. It becomes the haredim against the Other, our team versus their team. And in that scenario, it is easy to see how the glaring flaws in "our" team are downplayed as even minor flaws in theirs are highlighted.

But the truth is (or should be) that we are all one team under the law with equal access and equal protection for all who abide by it.

Those who do not abide by it, be they antisemites, racist bigots, those who steal from government coffers or common thieves all need to be prosecuted and punished.

And, again, there is absolutely no justification or excuse for randomly attacking haredim.