"My girl went through a very difficult time, every man she saw frightened her. She imagined her attacker on the street. The police acted incompetently, as if they did not care. They just fell asleep on duty." 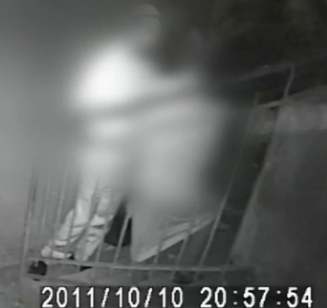 About 21 months ago, a 13-year-old girl was molested by a stranger.

But, Ynet reported, even though a security camera captured part of the molestation, police have not made an arrest.

The victim’s father insists police closed the case after mishandling it. Police deny that charge.

In the video, a man wearing light-colored clothes and yarmulke is seen leading the girl to a dirty stairwell where he fondles her breasts.

“Along the entrance to our building, there is a passageway to a parallel street. It’s a neglected area and this is where he went with our daughter. Probably because he was afraid of getting caught, he changed locations twice. He also asked our daughter if she could go with him to his home, but our oldest son had started looking for his sister and the man apparently panicked and left her alone," the father told Ynet.

After the girl told her her parents about the molestation, they went to the Jerusalem District Police and filed a criminal complaint, and the girl gave testimony to police.

The girl’s father claims that when he filed the criminal complaint, police asked him to check to see if any security security cameras had captured the molestation or the moments surrounding it. He eventually found a shop owner that did have security video. But the shop owner rightfully would not release the video to any one but police. But the police allegedly refused to come and get it.

"He wanted to transfer it directly to the police but they didn’t come to the location. It was only after persuasion and pleading that he gave me a copy. I went to the station and showed them the video. Officers were shocked and claimed they would take care of it,” the father said.

Then, about a week after the molestation, the victim’s brother saw a man who looked like his daughter’s attacker. He wanted to take a picture of him but the man saw the camera and fled.

Moments later, the girl’s father called the police investigator to report the sighting but was allegedly reprimanded by the investigator who told him not to contact her directly. Instead, he was told to come to the police station.

A few weeks later, police allegedly told the girl’s father that "a decision was made to close the case and not pursue the investigation or the claims.”

His children continued to see the alleged attacker in the neighborhood.

"My girl went through a very difficult time, every man she saw frightened her. She imagined her attacker on the street. The police acted incompetently, as if they did not care. They just fell asleep on duty,” the girl’s father told Ynet.

"The video was examined. An investigation was launched, but no suspects were found. Investigation of the case is currently focused on the intelligence level and the effort to locate the suspect,” the police told Ynet.

"My girl went through a very difficult time, every man she saw frightened her. She imagined her attacker on the street. The police acted incompetently, as if they did not care. They just fell asleep on duty."